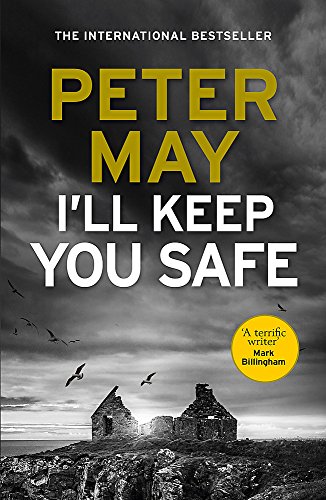 I'll Keep You Safe by Peter May

Million-selling Peter May marks his return to the Isle of Lewis.

I'll Keep You Safe by Peter May

** AUTHOR OF CAST IRON, COFFIN ROAD AND THE BLACKHOUSE **
** OVER 4 MILLION COPIES SOLD **
** AN EXPLOSIVE NEW THRILLER SET IN THE OUTER HEBRIDES **

Niamh and Ruairidh Macfarlane co-own the Hebridean company Ranish Tweed. On a business trip to Paris to promote their luxury brand, Niamh learns of Ruairidh's affair, and then looks on as he and his lover are killed by a car bomb. She returns home to Lewis, bereft.

I'LL ALWAYS BE THERE FOR YOU

Niamh begins to look back on her life with Ruairidh, desperate to identify anyone who may have held a grudge against him. The French police, meanwhile, have ruled out terrorism, and ruled in murder - and sent Detective Sylvie Braque to shadow their prime suspect: Niamh.

I'LL KEEP YOU SAFE, NO MATTER WHAT

As one woman works back through her memories, and the other moves forward with her investigation, the two draw ever closer to a deadly enemy with their own, murderous, designs.

He is a terrific writer doing something different.From the first page I knew I was in safe hands. I knew I could trust this writer.Wonderfully compellingPeter May is an author I'd follow to the ends of the earth. - New York TimesDark, exciting and atmospheric.

Peter May was born and raised in Scotland. He was an award-winning journalist at the age of twenty-one and a published novelist at twenty-six. When his first book was adapted as a major drama series for the BCC, he quit journalism and during the high-octane fifteen years that followed, became one of Scotland's most successful television dramatists. He created three prime-time drama series, presided over two of the highest-rated serials in his homeland as script editor and producer, and worked on more than 1,000 episodes of ratings-topping drama before deciding to leave television to return to his first love, writing novels.

He has won several literature awards in France, received the USA's Barry Award for The Blackhouse, the first in his internationally bestselling Lewis Trilogy; and in 2014 was awarded the ITV Specsavers Crime Thriller Book Club Best Read of the Year award for Entry Island. Peter now lives in South-West France with his wife, writer Janice Hally.

GOR008838232
9781784294939
1784294934
I'll Keep You Safe by Peter May
Peter May
Used - Very Good
Hardback
Quercus Publishing
2018-01-11
448
N/A
Book picture is for illustrative purposes only, actual binding, cover or edition may vary.
This is a used book - there is no escaping the fact it has been read by someone else and it will show signs of wear and previous use. Overall we expect it to be in very good condition, but if you are not entirely satisfied please get in touch with us
Trustpilot