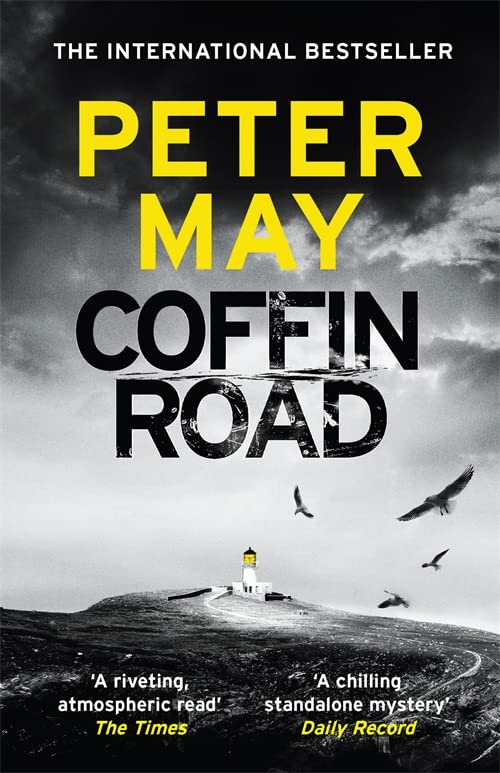 Coffin Road by Peter May

**A SUNDAY TIMES TOP 5 BESTSELLER**
**A BBC RADIO 2 BOOK CLUB PICK**
**FROM THE AUTHOR OF THE BLACKHOUSE, CAST IRON AND I'LL KEEP YOU SAFE**

MILLION-SELLING PETER MAY MIXES MURDER, MYSTERY and MEMORY . . . AND MARKS HIS RETURN TO THE OUTER HEBRIDES

A man stands bewildered on a deserted beach on the Hebridean Isle of Harris. He cannot remember who he is. The only clue to his identity is a folded map of a path named the Coffin Road. He does not know where this search will take him.

A detective from Lewis sits aboard a boat, filled with doubt. DS George Gunn knows that a bludgeoned corpse has been discovered on a remote rock twenty miles offshore. He does not know if he has what it takes to uncover how and why.

A teenage girl lies in her Edinburgh bedroom, desperate to discover the truth about her scientist father's suicide. Two years on, Karen Fleming still cannot accept that he would wilfully abandon her. She does not yet know his secret.

Coffin Road follows three perilous journeys towards one shocking truth - and the realisation that ignorance can kill us.

LOVE PETER MAY? Order his new thriller, A SILENT DEATH!

Peter May was born and raised in Scotland. He was an award-winning journalist at the age of twenty-one and a published novelist at twenty-six. When his first book was adapted as a major drama series for the BCC, he quit journalism and during the high-octane fifteen years that followed, became one of Scotland's most successful television dramatists. He created three prime-time drama series, presided over two of the highest-rated serials in his homeland as script editor and producer, and worked on more than 1,000 episodes of ratings-topping drama before deciding to leave television to return to his first love, writing novels.

He has won several literature awards in France, received the USA's Barry Award for The Blackhouse, the first in his internationally bestselling Lewis Trilogy; and in 2014 was awarded the ITV Specsavers Crime Thriller Book Club Best Read of the Year award for Entry Island. Peter now lives in South-West France with his wife, writer Janice Hally.

GOR007635995
9781784293130
178429313X
Coffin Road: the Sunday Times Bestseller and BBC Radio 2 Book Club Pick by Peter May
Peter May
Used - Very Good
Paperback
Quercus Publishing
2016-07-14
400
N/A
Book picture is for illustrative purposes only, actual binding, cover or edition may vary.
This is a used book - there is no escaping the fact it has been read by someone else and it will show signs of wear and previous use. Overall we expect it to be in very good condition, but if you are not entirely satisfied please get in touch with us
Trustpilot