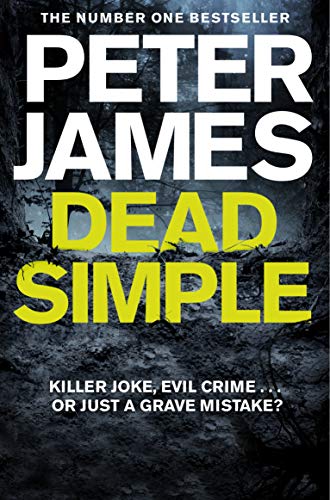 Dead Simple was the first book by number-one bestselling crime and thriller writer Peter James to be part of the multimillion-copy series featuring the definitive Brighton detective, Roy Grace.

Dead Simple is the stunning first novel in the number one bestselling Roy Grace series from award-winning author, Peter James.

It was meant to be a harmless stag-night prank. But a few hours later, the groom has disappeared
and his friends are dead.

With only three days to the wedding, Grace is contacted by the man's distraught fiancee to unearth what happened on that fateful night.

Grace discovers that the one man who ought to know of the groom's whereabouts is saying nothing. But then he has a lot more to gain than anyone realizes, for one man's disaster is another man's fortune . . .

Peter James is a UK number one bestselling author, best known for writing crime and thriller novels, and the creator of the much-loved Detective Superintendent Roy Grace. Globally, his books have been translated into thirty-seven languages.

Synonymous with plot-twisting page-turners, Peter has garnered an army of loyal fans throughout his storytelling career - which also included stints writing for TV and producing films. He has won over forty awards for his work, including the WHSmith Best Crime Author of All Time Award, Crime Writers' Association Diamond Dagger and a BAFTA nomination for The Merchant of Venice starring Al Pacino and Jeremy Irons for which he was an Executive Producer. Many of Peter's novels have been adapted for film, TV and stage.

GOR009945954
9781509898824
1509898824
Dead Simple by Peter James
Peter James
Roy Grace
Used - Very Good
Paperback
Pan Macmillan
2019-04-23
480
N/A
Book picture is for illustrative purposes only, actual binding, cover or edition may vary.
This is a used book - there is no escaping the fact it has been read by someone else and it will show signs of wear and previous use. Overall we expect it to be in very good condition, but if you are not entirely satisfied please get in touch with us
Trustpilot