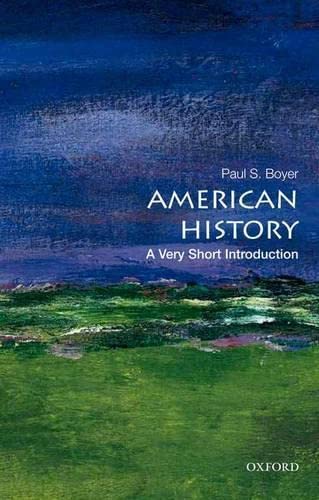 This brief history of America will span the earliest migrations to the present, reflecting Paul S. Boyer's interests in social, intellectual, and cultural history, including popular culture and religion. It will reflect his personal view of American history, in which a sense of paradox and irony loom large. While noting positive achievements-political, economic, social, and cultural-he will also discuss the United States's failures to live up to its oft-stated ideals; although America has figured in the world's imagination (and its own self-image) as a "land of opportunity" offering "liberty and justice for all," the reality has often fallen short. For example, the establishment of the North American colonies had very different meanings for colonists from the British Isles and Europe, for Native peoples, and for enslaved Africans brought against their will. The late nineteenth century saw not only impressive industrial expansion and the creation of vast fortunes but also appalling conditions in urban-immigrant slums and a degraded, exploited labor force. The twentieth-century emergence of a suburban society of consumer abundance meant a better life for many and laid the groundwork for impressive cultural creativity, yet left behind crime-ridden inner cities and spawned a stultifying mass culture. The immigrants who have renewed and revitalized the nation have also stirred hostility and resentment. While American popular culture has demonstrated global appeal, the projection of U.S. military power abroad, from the Philippines early in the twentieth century to Iraq early in the twenty-first, has sometimes failed in its purpose and damaged the nation's international standing. Although this book will not be a muckraking expose or anachronistic moral tract, neither will it be a celebratory panegyric or a bland recital of facts. ABOUT THE SERIES: The Very Short Introductions series from Oxford University Press contains hundreds of titles in almost every subject area. These pocket-sized books are the perfect way to get ahead in a new subject quickly. Our expert authors combine facts, analysis, perspective, new ideas, and enthusiasm to make interesting and challenging topics highly readable.
"Paul Boyer, a scholar's scholar and a teacher's teacher, has here encompassed the entirety of American history in an account that testifies on every page to his lifetime of deep and thoughtful learning, and to his remarkable powers of synthesis, concision, balance, and trenchantly lucid writing."--David M. Kennedy, author of Freedom From Fear: The American People in Depression and War, 1929-1945