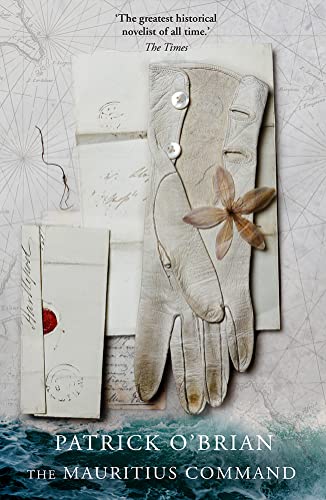 The Mauritius Command by Patrick O'Brian

Patrick O'Brian's Aubrey-Maturin tales are widely acknowledged to be the greatest series of historical novels ever written. To commemorate the 40th anniversary of their beginning, with Master and Commander, these evocative stories are being re-issued in paperback with smart new livery. This is the fourth book in the series.

The Mauritius Command by Patrick O'Brian

Patrick O'Brian's Aubrey-Maturin tales are widely acknowledged to be the greatest series of historical novels ever written. To commemorate the 40th anniversary of their beginning, with Master and Commander, these evocative stories are being re-issued in paperback with smart new livery. This is the fourth book in the series.

Captain Jack Aubrey is ashore on half-pay without a command - until his friend, and occasional intelligence agent, Stephen Maturin, arrives with secret orders for Aubrey to take a frigate to the Cape of Good Hope, under a Commodore's pennant. But the difficulties of carrying out his orders are compounded by two of his own captains - Lord Clonfert, a pleasure-seeking dilettante, and Captain Corbett, whose severity can push his crews to the verge of mutiny.

Based on the actual campaign of 1810 in the Indian Ocean, O'Brian's attention to detail of eighteenth-century life ashore and at sea is meticulous. This tale is as beautifully written and as gripping as any in the series; it also stands on its own as a superlative work of fiction.

'...full of the energy that comes from a writer having struck a vein... Patrick O'Brian is unquestionably the Homer of the Napoleonic wars.' James Hamilton- Paterson

'You are in for the treat of your lives. Thank God for Patrick O'Brian: his genius illuminates the literature of the English language, and lightens the lives of those who read him.' Kevin Myers, Irish Times

'Patrick O'Brian has written splendid novels - of which The Mauritius Command is the latest - recounting episodes in the lives of the naval officer Jack Aubrey and his friend the saturnine Irish physician, Stephen Maturin... Taken together, the novels are a brilliant achievement. They display staggering erudition on almost all aspects of early nineteenth-century life, with impeccable period detail. [Compared to Bush and Hornblower] Aubrey and Maturin are subtler, richer items; in addition, Patrick O'Brian has a gift for the comic which Forester lacks.' T.J. Binyon, Times Literary Supplement

'O'Brian has a monumental knowledge of Naval history of the time. Nothing is glamorised. The press gangings, the floggings, the squalor are all here. But here, too, are heroism and humour.' Mark Kahn, Sunday Mirror

'The Mauritius Command is outstanding'
Observer

GOR001208780
9780006499183
000649918X
The Mauritius Command by Patrick O'Brian
Patrick O'Brian
Used - Very Good
Paperback
HarperCollins Publishers
1997-01-06
384
Winner of Heywood Hill Literary Prize 1995
Book picture is for illustrative purposes only, actual binding, cover or edition may vary.
This is a used book - there is no escaping the fact it has been read by someone else and it will show signs of wear and previous use. Overall we expect it to be in very good condition, but if you are not entirely satisfied please get in touch with us
Trustpilot