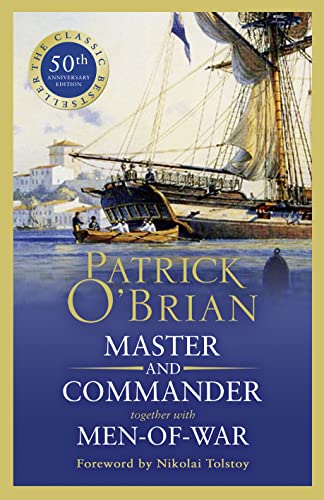 This special hardback edition celebrates the 50th anniversary of first publication with a brand-new foreword by O'Brian's stepson and biographer, Nikolai Tolstoy, and artist's note by Geoff Hunt, and includes the complete text of the previously unavailable Men-of-War, O'Brian's fascinating guide to the world of Aubrey/Maturin.

This special hardback edition celebrates the 50th anniversary of first publication with a brand-new foreword by O'Brian's stepson and biographer, Nikolai Tolstoy, and artist's note by Geoff Hunt, and includes the complete text of the previously unavailable Men-of-War, O'Brian's fascinating guide to the world of Aubrey/Maturin.

Master and Commander is the first of Patrick O'Brian's now famous Aubrey/Maturin novels, regarded by many as the greatest series of historical novels ever written. It establishes the friendship between Captain Jack Aubrey RN and Stephen Maturin, who becomes his secretive ship's surgeon and an intelligence agent. It contains all the action and excitement which could possibly be hoped for in a historical novel, but it also displays the qualities which have put O'Brian far ahead of any of his competitors: his depiction of the detail of life aboard a Nelsonic man-of-war, of weapons, food, conversation and ambience, of the landscape and of the sea. O'Brian's portrayal of each of these is faultless and the sense of period throughout is acute. His power of characterisation is above all masterly.

This brilliant historical novel marked the debut of a writer who has grown into one of the most remarkable literary novelists now writing, the author of what Alan Judd, writing in the Sunday Times, has described as 'the most significant extended story since Anthony Powell's A Dance to the Music of Time'.

'...full of the energy that comes from a writer having struck a vein... Patrick O'Brian is unquestionably the Homer of the Napoleonic wars.'
James Hamilton- Paterson

'You are in for the treat of your lives. Thank God for Patrick O'Brian: his genius illuminates the literature of the English language, and lightens the lives of those who read him.'
Kevin Myers, Irish Times

'In a highly competitive field it goes straight to the top. A real first-rater.'
Mary Renault

'I never enjoyed a novel about the sea more. It is not only that the author describes the handling of a ship of 1800 with an accuracy that is as comprehensible as it is detailed, a remarkable feat in itself. Mr O'Brian's three chief characters are drawn with no less depth of sympathy than the vessels he describes, a rare achievement save in the greatest writers of this genre. It deserves the widest readership.'
Irish Times

NGR9780008328320
9780008328320
0008328323
MASTER AND COMMANDER [Special edition including bonus book: MEN-OF-WAR] by Patrick O'Brian
Patrick O'Brian
New
Hardback
HarperCollins Publishers
2019-10-17
496
N/A
Book picture is for illustrative purposes only, actual binding, cover or edition may vary.
This is a new book - be the first to read this copy. With untouched pages and a perfect binding, your brand new copy is ready to be opened for the first time
Trustpilot