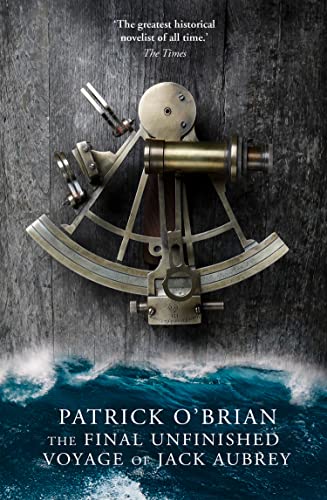 The Final, Unfinished Voyage of Jack Aubrey by Patrick O'Brian

At the time of his death, Patrick O'Brian had begun to write a novel to follow on from Blue at the Mizzen, the twentieth book in the classic series. These are the chapters he had completed of the final voyage of Jack Aubrey and Stephen Maturin - the greatest friendship of modern literature

The Final, Unfinished Voyage of Jack Aubrey by Patrick O'Brian

At the time of his death, Patrick O'Brian had begun to write a novel to follow on from Blue at the Mizzen, the twentieth book in the classic series. These are the chapters he had completed of the final voyage of Jack Aubrey and Stephen Maturin - the greatest friendship of modern literature

The story picks up from the end of `Blue at the Mizzen' when Jack Aubrey receives the news, in Chile, of his elevation to flag rank: Rear Admiral of the Blue Squadron, with orders to sail to the South Africa station. This novel, unfinished and untitled at the time of O'Brian's death, would have been a chronicle of that mission, and much else besides.

The chapters left on O'Brian's death are presented here both in printed version - including his corrections to the typescript - and a facsimilie of his manuscript, which goes several pages beyond the end of the typescript and includes marginal notes by O'Brian.

And so this great `roman fleuve' comes to an end with Jack, with his `sacred blue flag', sailing through fair, sweet days - Stephen with his dissections and new love, Killick muttering darkly over the toasted cheese... Of course, we would rather have had the whole story; instead we have this proof that O'Brian's powers of observation, his humour and his understanding of his characters were undiminished to the end.

`Patrick O'Brian has given a farewell to his followers that is as gracious as it is gallant. And we, in turn, may find some solace in the thought that of all people, this man would not have hated to be taken out of action much as Nelson was: deep in triumph, shedding glory on the service he loved, and still at the peak of his powers.' Richard Snow

'One of the most compelling and brilliant novelists of his time...Beyond his superbly elegant writing, wit and originality, Patrick O'Brian showed an understanding of the nature of a floating world at the mercy of the wind and the sea which has never been surpassed.' MAX HASTINGS, Evening Standard

Patrick O'Brian, was until his death in 2000, one of our greatest contemporary novelists and widely regarded as one of the greatest storytellers of the English language. He is the author of the acclaimed Aubrey-Maturin novels and the biographer of Joseph Banks and Picasso. He has also written other novels including Testimonies, and many short stories. In 1995 he was the first recipient of the Heywood Hill Prize for a lifetime's contribution to literature. In the same year he was awarded the CBE. In 1997 he received an honorary doctorate of letters from Trinity College, Dublin. In 2003, his Aubrey novels were taken to the big screen by the film director Peter Weir with the blockbuster and critically acclaimed Master and Commander: The Far Side of the World. He died in Dublin in January 2000.

GOR003978514
9780007358434
0007358431
The Final, Unfinished Voyage of Jack Aubrey by Patrick O'Brian
Patrick O'Brian
Used - Good
Paperback
HarperCollins Publishers
2010-04-01
192
N/A
Book picture is for illustrative purposes only, actual binding, cover or edition may vary.
This is a used book - there is no escaping the fact it has been read by someone else and it will show signs of wear and previous use. Overall we expect it to be in good condition, but if you are not entirely satisfied please get in touch with us
Trustpilot