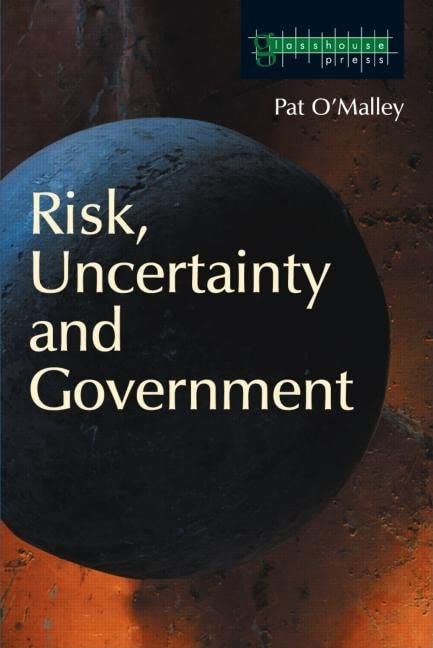 Pat O'Malley, commentator on risk and government, provides his overview of the historical and contemporary neo-liberal interplay of risk and uncertainty, including an account of the changing role of contract, tort and insurance.

Both risk and uncertainty are neo-liberal concepts, which can be viewed as complementary techniques for governing diverse aspects of life, rather than natural states of things. This new book examines the way these constructs govern the production of wealth through 'uncertain' speculation and 'calculable' investment formulae.

The way in which risk and uncertainty govern the minimisation of harms through insurance and through the uncertain practices of 'reasonable foresight' is discussed, and O Malley looks at the way these same techniques were historically forged out of moral and social beliefs about how to govern properly. In addition, the book analyzes is how, during this process, ideas such as 'contract' and distinctions between insurance and gambling were invented to order to 'properly' govern the risky and uncertain future.

The immediate audiences for this book include individuals interested in the sociology of law, governance, risk and crime. It contains nine chapters, several of which are revised versions of papers published elsewhere. Specific chapters focus on liberalism, social security, contract law, gambling and insurance. All of these are connected by an emphasis on the vicissitudes of governmental projects relating to risk and uncertainty...Individuals interested in contemporary developments in the analysis and operation of governance would benefit from a cover-to-cover reading of the text. However, the most immediately relevant chapters for readers of this journal are chapter 7 on 'Risk, Crime Control and Criminal Justice,' chapter 8 on 'Risking Drug Use,' and the introductory and concluding chapters, both of which introduce and clarify an important distinction between risk and uncertainty. Canadian Journal of Criminology and Criminal Justice , autumn 2005. Written by Kevin D. Haggerty, Director, Criminology Program, University of Alberta. In the last 20 years or so, there has been an explosion in the sociological literature on risk, exemplified by Beck's analysis of risk society and Ewalds's of l'etat-providence. O'Malley is a leading member of the second generation of risk theorists, and this important book gathers together a number of his published articles, some considerably revised. There are also four new chapters, including a very helpful introduction which provides excellent, and accessible, overview of he existing literature. In this, law is just another technique for dealing with risk and uncertainly - to be considered alongside (for example) insurance - but tort law in particular provides fertile ground for the application of risk theory, and O'Malley's second chapter (From Independence to Social Security) contains suggestive analyses of the standard of reasonable foresight, the introduction of strict product liability (a risk-based technique for distributing the cost of harms socially), and the general international trend to displace tort in favour of social insurance in respect of workplace accidents. Other chapters deal illuminatingly with contract law, insurance and criminal justice. Throughout the author highlights how difference configurations of risk and uncertainty lend themselves to carrying political conceptions of the responsive individual..O'Malley must ultimately take great credit for pointing his legal readers towards new ways of understanding such fundamental institutions as tort and insurance. Tort and Insurance Law Yearbook. Springer, 2005: Country Reports. Written by Ken Oliphant.
Pat O'Malley has been a leading commentator on risk and government for the past decade. He has researched the area at Australian, British and North American universities, and has served on many government committees in the field. Recently he was appointed to a Canada Research Chair with a brief to continue investigations into the 'risk society'.
Risk, Uncertainty and Government. From Independence to Social Security. Enterprising Liberalism. Uncertainty, Liberalism and Contract. Risky Contracts: Gambling, Speculation and Insurance. Insurance, Actuarialism and Thrift. Risk, Crime Control and Criminal Justice. Risking Drug Use. Risk, Uncertainty and Freedom
GOR003259441
9781904385004
1904385001
Risk, Uncertainty and Government by Pat O'Malley (Carleton University, Ottawa, Canada)
Pat O'Malley (Carleton University, Ottawa, Canada)
Used - Very Good
Paperback
Taylor & Francis Ltd
20041004
224
N/A
Book picture is for illustrative purposes only, actual binding, cover or edition may vary.
This is a used book - there is no escaping the fact it has been read by someone else and it will show signs of wear and previous use. Overall we expect it to be in very good condition, but if you are not entirely satisfied please get in touch with us
Trustpilot