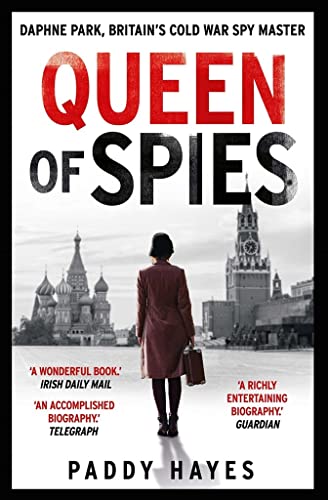 Queen of Spies by Paddy Hayes

Queen of Spies captures both the paranoia and the on-the-ground realities of intelligence work from the Second World War to the Cold War, and the life of Britain's celebrated female spy.

From being raised in a Tanzanian shack, to attaining MI6's most senior operational rank, Daphne Park led a highly unusual life. Drawing on first-hand accounts of intelligence workers close to agent Park, Hayes reveals how she rose in a male-dominated world to become Britain's Cold War spy master.

With intimate, nail-biting details Queen of Spies captures both the paranoia and on-the-ground realities of intelligence work from the Second World War to the Cold War, and the life of Britain's celebrated female spy.

'Writing a biography of Daphne Park was never going to be easy and Paddy Hayes has done a very good job.'

'A remarkable biography of a remarkable woman - providing real insight into MI6 of the Cold War.'

'Daphne Park was truly the empress of British espionage. This book is a major contribution to understanding her fascinating career in MI6. Remarkably well-researched, it is required reading for anyone interested in the world of secret service.'

'A wonderful new book that would make a great gift for anyone.'

'This book was entertaining and thrilling, yet also informative and thought-provoking. It has explored many aspects of history and displays Hayes' passion for the intelligence service. It has a wide appeal to anyone who enjoys history or simply a good story.'

'The only biography on Baroness Park and it fills a big gap. Hayes has produced an interesting and informative work.'

'Hayes is open about his own speculations, given the still-classified nature of much of this material, but he successfully conveys the inspiring nature of Park's personal story and achievements, offering an informative account of the Cold War and the workings of the super secret SIS.'

'A fascinating and long-overdue biography.'

'The fascinating story of the evolution of the British Secret Intelligence Service (SIS) from World War II to the Cold War through the eyes of Daphne Park, one of its outstanding and most unusual operatives. He provides the reader with one of the most intimate narratives yet of how the modern SIS actually went about its business whether in Moscow, Hanoi, or the Congo.'

'An interesting and informative work.'

'Hayes's accomplished biography circumvents the scanty evidence by offering a broader portrait of the Secret Service itself, a badly compromised men's club in which the forthright Park still managed to succeed.'

'@nly the second-ever biography published about a Cold War career officer in MI6.'

'Dame Daphne's story leaves us wondering about reality as seen through the eyes of a spy; and about how far spy work affected that reality.'

'Hayes deftly manages to chart her extraordinary life... that read like passages from a thriller.'

'This is an excellent biography of a remarkable woman... Intelligence researcher Hayes opens the door on the fascinating life of one of England's greatest spies, Daphne Park... As exciting as any good spy thriller but it's all true.'

Paddy Hayes was born in Cork and educated in Dublin and Harvard, Massachusetts. He has spent five decades researching the world of intelligence whilst developing business intelligence and market research companies from his native Ireland. His interest in politics extends to acting as a constituency Director of Elections in the last two general elections in Ireland.

GOR011755225
9780715654057
0715654055
Queen of Spies: Daphne Park, Britain's Cold War Spy Master by Paddy Hayes
Paddy Hayes
Used - Very Good
Paperback
Prelude
2020-10-15
384
N/A
Book picture is for illustrative purposes only, actual binding, cover or edition may vary.
This is a used book - there is no escaping the fact it has been read by someone else and it will show signs of wear and previous use. Overall we expect it to be in very good condition, but if you are not entirely satisfied please get in touch with us
Trustpilot