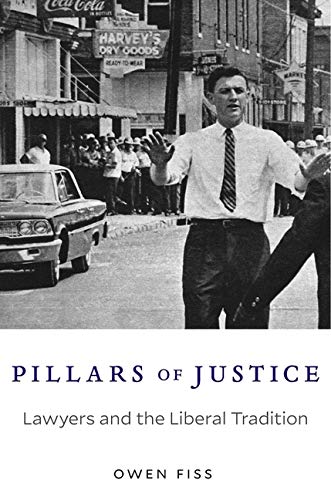 Pillars of Justice by Owen Fiss

The constitutional theorist Owen Fiss explores the purpose and possibilities of life in the law through a moving account of thirteen lawyers who shaped the legal world during the past half century. He tries to identify the unique qualities of mind and character that made these individuals so important to the institutions and principles they served.

Pillars of Justice: Lawyers and the Liberal Tradition by Owen Fiss

Pillars of Justice explores the purpose and possibilities of life in the law through moving accounts of thirteen lawyers who shaped the legal world during the past half century.

Some, such as Thurgood Marshall, were Supreme Court Justices. Others, like John Doar and Burke Marshall, set the civil rights policies of the federal government during the 1960s. Some, including Harry Kalven and Catharine MacKinnon, have taught at the greatest law schools of the nation and nourished the liberalism rooted in the civil rights era. Jurists from abroad-Aharon Barak, for example-were responsible for the rise of the human rights movement that today carries the burden of advancing liberal values. These lawyers came from diverse backgrounds and held various political views. What unites them is a deep, abiding commitment to Brown v. Board of Education as an exceptional moment in the life of the law-a willingness to move mountains, if need be, to ensure that we are living up to our best selves. In tracing how these lawyers over a period of fifty years used the Brown ruling and its spirit as a beacon to guide their endeavors, this history tells the epic story of the liberal tradition in the law.

For Owen Fiss, one of the country's leading constitutional theorists, the people described were mentors, colleagues, friends. In his portraits, Fiss tries to identify the unique qualities of mind and character that made these individuals so important to the institutions and legal principles they served.

This book is a testimonial for all of those who can still believe in the nobility of law-the capacity, as Fiss says, of 'law working itself pure.' This is an enormously important message, and it surely deserves to be heard at a time when idealism and faith in law are in very short supply in this country. -- Stanley N. Katz, Princeton University
In his elegant portraits of leading legal figures of our day, Fiss brilliantly captures a particular moment in the recent history of liberalism, one full of the promise that law could make good on its twin commitments to liberty and equality. An important, timely, and unexpectedly moving book. -- Lawrence Douglas, Amherst College
Fiss, an eminent constitutional scholar, offers a warm and generous reflection on the men and women who shaped his life in the law. -- Michael O'Donnell * New York Times Book Review *
One of the greatest teachers I've ever had...A master teacher who had a clear view of the law as an engine of justice and of fundamental values...This book is a book about thirteen of Owen's greatest teachers and his vision of the law and his heroes in the law-the people who inspired him to carry on this torch of reason. He calls one of his teachers, Aharon Barak, an apostle of the Enlightenment and that's what Owen Fiss is. -- Jeffrey Rosen, president and CEO of the National Constitution Center
From these spare and elegant profiles emerges a collective portrait of greatness in the law and, more particularly, of Fiss's conception of what makes law great. In an era when lawyers are often condemned as hired guns, and law is often dismissed as little more than politics in disguise, Fiss's collection provides a welcome counterpoint by reminding us that law, pursued in the interests of justice rather than material interest or self-aggrandizement, can be a noble profession...Taken together, these essays offer readers a view of constitutional and civil-rights law as a forum for articulating the nation's most fundamental values; for enforcing those ideals when the political branches are not up to doing so; and for pursuing justice through the application of reasoned judgment. Today, too many lawyers-professors and practitioners alike-reject this approach as naive and overly idealistic; they view law more cynically as just a tool of political action, no different from any other. In this book, Fiss offers concrete evidence, drawn from the lives of others, that this cynicism is not warranted. -- David Cole * The Nation *
Owen Fiss is Sterling Professor Emeritus of Law at Yale University.
NPB9780674971868
9780674971868
0674971868
Pillars of Justice: Lawyers and the Liberal Tradition by Owen Fiss
Owen Fiss
New
Hardback
Harvard University Press
20170525
224
N/A
Book picture is for illustrative purposes only, actual binding, cover or edition may vary.
This is a new book - be the first to read this copy. With untouched pages and a perfect binding, your brand new copy is ready to be opened for the first time
Trustpilot