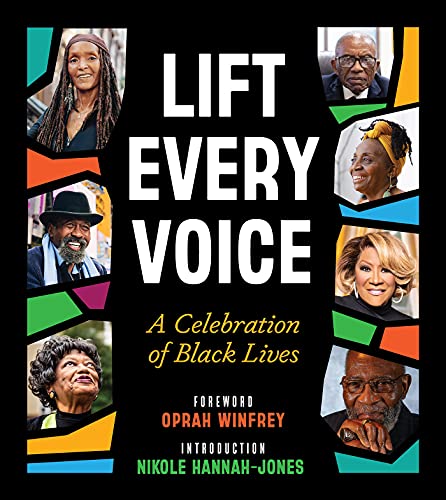 Lift Every Voice by Oprah Winfrey

Lift Every Voice: A Celebration of Black Lives by Oprah Winfrey

When we lift every voice, we forge a deep and enduring connection to the past-and carve a tunnel of hope to a brighter future for us all. -Oprah Winfrey


This book, above all else, is a reminder of where we have been and the debt we owe to those who came before. These Americans have not passed the torch, but are clasping it with us, urging us to continue the work alongside them,-Nikole Hannah-Jones


For so long, too many stories that reveal what it means and feels like to be Black in America have been overlooked outside Black communities. After these long years of racial reckonings and nascent awakenings, Lift Every Voice presents interviews with the oldest generation of Black Americans about their lives, their experiences, and the wisdom that can carry all of us to a better future. The 54 fascinating individuals-civil rights activists, hometown heroes, celebrities, and many others-include:

* Andre de Shields, an actor, director, and choreographer who discusses the essential values and lessons his parents taught him
* Clarice Freeman, an educator and community leader in Houston, Texas who speaks about how to live a long and fulfilling life
* Fred Gray, a civil rights lawyer who represented Rosa Parks and Claudette Colvin, also featured in the book, against disorderly conduct charges for their refusal to give up their bus seats to white passengers
* Patti LaBelle a singer/songwriter who shares her thoughts on aging and her career as an internationally celebrated powerhouse singer
* Faye Wattleton, a reproductive rights activist and the first African American and youngest president of Planned Parenthood who recounts her experience as a nurse and midwife in the 1960s

The insightful interviews were conducted by a brilliant team, many of whom are rising Black journalists from historically Black colleges and universities, and the portraits were shot by a talented group of next generation Black photographers. Lift Every Voice is named after the James Weldon Johnson poem and hymn Lift Every Voice and Sing, which is often referred to as the Black national anthem.

Lift Every Voice is both a testament to the strength of the elders' stories and a triumphant beginning for a new generation of Black journalists and photographers.
Compelling
-ELLE Decor
Oprah Winfrey has created an unparalleled connection with people around the world through the power of media. As host and supervising producer of the top-rated, award-winning The Oprah Winfrey Show, she entertained, enlightened, and uplifted millions of viewers for 25 years. Her accomplishments as a global media leader and philanthropist have established her as one of the most respected and admired public figures today.

Nikole Hannah-Jones is a Pulitzer Prize-winning reporter covering racial injustice for the New York Times Magazine and creator of the landmark 1619 Project, which commemorates the 400th anniversary of the beginning of slavery in what would become the United States by examining slavery's modern legacy and reframing the way we understand this history and the contributions of Black Americans to the nation. In 2016, she cofounded the Ida B. Wells Society for Investigative Reporting, a training and mentorship organization dedicated to increasing the ranks of investigative reporters of color.

Hearst Magazines' portfolio of more than 25 powerful brands in the U.S. reaches nearly 165 million readers and site visitors each month.

Hearst Television owns and operates 33 television and two radio stations serving 26 media markets across 39 states reaching over 21 million U.S. television households.
NGR9781950785810
9781950785810
1950785815
Lift Every Voice: A Celebration of Black Lives by Oprah Winfrey
Oprah Winfrey
New
Hardback
Hearst Home Books
2022-04-26
256
N/A
Book picture is for illustrative purposes only, actual binding, cover or edition may vary.
This is a new book - be the first to read this copy. With untouched pages and a perfect binding, your brand new copy is ready to be opened for the first time
Trustpilot