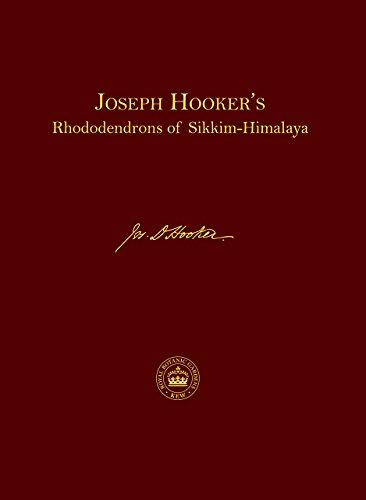 Sir Joseph Dalton Hooker (1817-1911) is perhaps the greatest of the lauded Directors of the Royal Botanic Gardens, Kew, and 2017 marks both the bicentenary of his birth and 170 years since his trip to India where he sought botanical treasures in the Himalayas.

This facsimile edition of Hooker's The Rhododendrons of Sikkim-Himalaya has been reproduced from an original held in the Library, Art & Archives of the Royal Botanic Gardens, Kew. Its publication in three volumes between 1849 and 1851 was an unparalleled commercial success for Hooker. The lavish illustrations produced by Walter Hood Fitch which accompanied the rhododendron descriptions were, and still are, considered to be some of the finest examples of botanical illustration ever produced. The book introduced to the Victorian public new species of rhododendrons that were to become hugely popular and also to play a role in the evolution of British horticultural style and landscape design.

All three parts of the publication are brought together in this facsimile, with all 30 plates beautifully reproduced alongside Hooker's original descriptions. A new introductory chapter by Virginia Mills and Cam Sharp Jones from Kew's Joseph Hooker Correspondence Project describes Hooker's time in India and the reception of the original publication in 1849. And Ed Ikin, Head of Wakehurst Landscape and Horticulture, describes the impact Hooker had on British gardening and the inspiration he provided for a whole new approach to horticulture.This beautifully produced facsimile is a wonderful souvenir and celebration of Joseph Hooker and his work on the rhododendron flora of the Himalayas.

NPB9781842466452
9781842466452
1842466453
Joseph Hooker's Rhododendrons of Sikkim Himalaya by Mr Joseph Hooker
Mr Joseph Hooker
New
Hardback
Paulist Press International,U.S.
2017-12-01
104
N/A
Book picture is for illustrative purposes only, actual binding, cover or edition may vary.
This is a new book - be the first to read this copy. With untouched pages and a perfect binding, your brand new copy is ready to be opened for the first time
Trustpilot