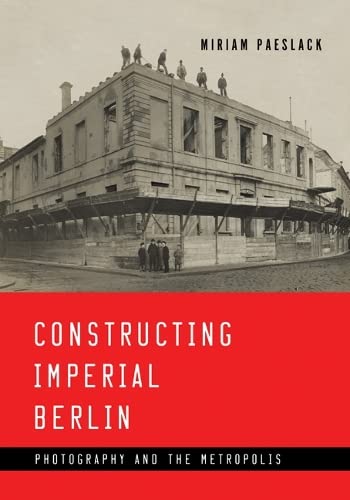 Constructing Imperial Berlin: Photography and the Metropolis by Miriam Paeslack

Since the fall of the Berlin Wall, the city that once visually epitomized a divided Europe has thrived in the international spotlight as an image of reunified statehood and urbanity. Yet research on Berlin's past has focused on the interwar years of the Weimar Republic or the Cold War era, with much less attention to the crucial Imperial years between 1871 and 1918.

Constructing Imperial Berlin is the first book to critically assess, contextualize, and frame urban and architectural photographs of that era. Berlin, as it was pronounced Germany's capital in 1871, was fraught with questions that had previously beset Paris and London. How was urban expansion and transformation to be absorbed? What was the city's understanding of its comparably short history? Given this short history, how did it embody the idea of a capital? A key theme of this book is the close interrelation of the city's rapid physical metamorphosis with repercussions on promotional and critical narratives, the emergence of groundbreaking photographic technologies, and novel forms of mass distribution.

Providing a rare analysis of this significant formative era, Miriam Paeslack shows a city far more complex than the common cliches as a historical and aspiring place suggest. Imperial Berlin emerges as a modern metropolis, only half-heartedly inhibited by urban preservationist concerns and rather more akin to North American cities in their bold industrialization and competing urban expansions than to European counterparts.

A late starter among European capitals, Imperial Berlin was eager to be recognized as a Weltstadt ('World City'). Miriam Paeslack has carefully analyzed a trove of rarely seen images that perfectly document the city's feverish development at the end of the nineteenth century and the parallel evolution of its self-conscious imagery. Taken together, the photographs present a compelling psychogram of the city on its way to becoming the 'Capital of the Twentieth Century'-the place where the dramatic tides of modernity and its traumatic conflicts would leave their most visible scars.-Dietrich Neumann, Brown University

Miriam Paeslack has written a compelling account of the multifarious ways in which photographers mediated in the construction of Berlin's urban imaginary. She brilliantly demonstrates photography's potency as Berlin contended with modernity by simultaneously promoting progress and inventing the past.-Nancy Stieber, University of Massachusetts, Boston

Miriam Paeslack is associate professor of modern and contemporary visual culture and arts management at the University at Buffalo. She is author of Berlin im 19. Jahrhundert: Fruhe Photographien 1850-1914, coauthor of Johanna Diehl - Displace, and editor of Ineffably Urban: Imaging Buffalo.

NPB9781517902957
9781517902957
1517902959
Constructing Imperial Berlin: Photography and the Metropolis by Miriam Paeslack
Miriam Paeslack
New
Paperback
University of Minnesota Press
20190114
232
N/A
Book picture is for illustrative purposes only, actual binding, cover or edition may vary.
This is a new book - be the first to read this copy. With untouched pages and a perfect binding, your brand new copy is ready to be opened for the first time
Trustpilot