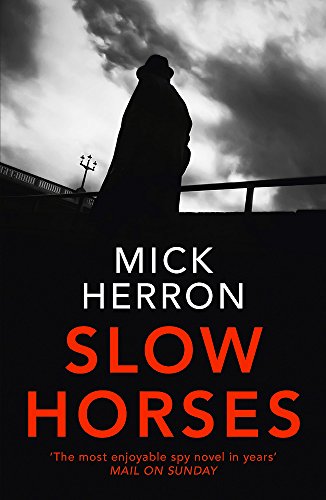 You don't stop being a spook just because you're no longer in the game.

Banished to Slough House from the ranks of achievers at Regent's Park for various crimes of drugs and drunkenness, lechery and failure, politics and betrayal, Jackson Lamb's misfit crew of highly trained joes don't run ops, they push paper.

But not one of them joined the Intelligence Service to be a 'slow horse'.

A boy is kidnapped and held hostage. His beheading is scheduled for live broadcast on the net.

And whatever the instructions of the Service, the slow horses aren't going to just sit quiet and watch . . .

Praise for Mick Herron's Jackson Lamb series: * . *
The new spy master * Evening Standard *
Jackson Lamb - the most fascinating and irresistible thriller series hero to emerge since Jack Reacher * Sunday Times *
As a master of wit, satire, insight . . . Herron is difficult to overpraise * Daily Telegraph *
The finest new crime series this Millennium * Mail on Sunday *
The best modern British spy series * Daily Express *
The John le Carre of our generation * Val McDermid *
Mick Herron is the real deal * Irish Times *
If you read one spy novel this year, read Real Tigers. Better still, read the whole series * Andrew Taylor, The Spectator *
Surely among the finest British spy fiction of the past 20 years * Metro *
With his poet's eye for detail, his comic timing and relish for violence, Herron fills a gap that has been yawning ever since Len Deighton retired * Daily Telegraph *
The most enjoyable spy novel in years * Mail on Sunday *
A funny, stylish, satirical, gripping story * Guardian *
I was delighted to discover that this is merely the first in a captivating series -- Christopher Brookmyre * Herald *
The first of his series about MI5 and a character called Jackson Lamb, one of the great monsters of modern fiction. He's a wonderfully cynical writer and there's a lot of dark humour in it. I'm not clever enough to write this sort of thing -- Bernard Cornwell * Daily Express *
I was delighted to discover Mick Herron's riotous Slow Horses series about the black sheep of MI5 -- Nick Cohen * Big Issue *
For something really gripping, head for Mick Herron's Jackson Lamb series, in which a sidelined spook and his cohorts battle their way back to the centre of a life of espionage. Begin with Slow Horses and enjoy -- Alex Clark * Observer *

Mick Herron's six Slough House novels have been shortlisted for eight CWA Daggers, winning twice, and shortlisted for the Theakston Old Peculier Crime Novel of the Year three times. The first, Slow Horses, was picked as one of the best twenty spy novels of all time by the Daily Telegraph, while the most recent, Joe Country, was a Sunday Times top ten bestseller.

Mick Herron was born in Newcastle upon Tyne, and now lives in Oxford.

GOR008575506
9781473674189
1473674182
Slow Horses: Jackson Lamb Thriller 1 by Mick Herron
Mick Herron
Jackson Lamb Thriller
Used - Very Good
Paperback
John Murray Press
2017-07-27
336
N/A
Book picture is for illustrative purposes only, actual binding, cover or edition may vary.
This is a used book - there is no escaping the fact it has been read by someone else and it will show signs of wear and previous use. Overall we expect it to be in very good condition, but if you are not entirely satisfied please get in touch with us
Trustpilot