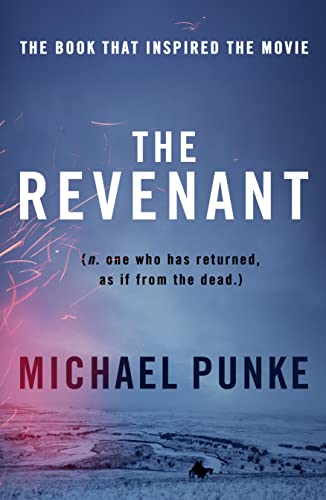 The Revenant by Michael Punke

THE BESTSELLING BOOK THAT INSPIRED THE AWARD-WINNING MOVIE

Winner of 3 OSCARS including BEST DIRECTOR and BEST ACTOR

The Revenant by Michael Punke

THE BESTSELLING BOOK THAT INSPIRED THE AWARD-WINNING MOVIE

Winner of 3 OSCARS including BEST DIRECTOR and BEST ACTOR

The trappers of the Rocky Mountain Fur Company live a brutal frontier life. Hugh Glass is one of the most respected men in the company, an experienced frontiersman and an expert tracker.
But when a scouting mission puts Glass face-to-face with a grizzly bear, he is viciously mauled and not expected to survive. Two men from the company are ordered to remain with him until his inevitable death. But, fearing an imminent attack, they abandon Glass, stripping him of his prized rifle and hatchet.

As Glass watches the men flee, he is driven to survive by one all-consuming desire: revenge. With shocking grit and determination, he sets out on a three-thousand-mile journey across the harsh American frontier, to seek revenge on the men who betrayed him.

The Revenant is a remarkable tale of obsession and the lengths that one man will go to for retribution.

'A spellbinding tale of heroism and obsessive retribution' Publishers Weekly

Michael Punke serves as the U.S. Ambassador to the World Trade Organization in Geneva, Switzerland. He has also served on the White House National Security Council staff and on Capitol Hill. He was formerly the history correspondent for Montana Quarterly and an adjunct professor at the University of Montana. He is the author of Fire and Brimstone: The North Butte Mining Disaster of 1917, and Last Stand: George Bird Grinnell, the battle to Save the Buffalo, and the Birth of the New West. His family home is in Montana.

GOR007268223
9780008124021
0008124027
The Revenant by Michael Punke
Michael Punke
Used - Very Good
Paperback
HarperCollins Publishers
2015-12-29
320
N/A
Book picture is for illustrative purposes only, actual binding, cover or edition may vary.
This is a used book - there is no escaping the fact it has been read by someone else and it will show signs of wear and previous use. Overall we expect it to be in very good condition, but if you are not entirely satisfied please get in touch with us
Trustpilot