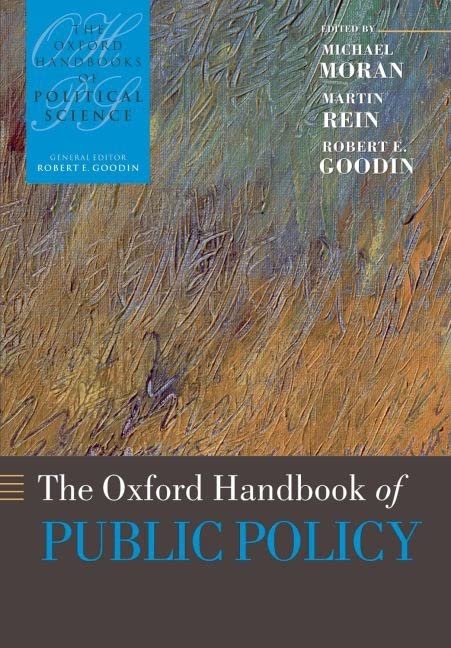 Oxford Handbooks of Political Science are the essential guide to the state of political science today. With engaging contributions from 55 major international scholars, the Oxford Handbook of Public Policy provides the key point of reference for anyone working in public policy and beyond.

Public policy is the business end of political science. It is where theory meets practice in the pursuit of the public good. Political scientists approach public policy in myriad ways. Some approach the policy process descriptively, asking how the need for public intervention comes to be perceived, a policy response formulated, enacted, implemented, and, all too often, subverted, perverted, altered, or abandoned. Others approach public policy more prescriptively, offering politically-informed suggestions for how normatively valued goals can and should be pursued, either through particular policies or through alternative processes for making policy. Some offer their advice from the Olympian heights of detached academic observers, others as 'engaged scholars' cum advocates, while still others seek to instil more reflective attitudes among policy practitioners themselves toward their own practices. The Oxford Handbook of Public Policy mines all these traditions, using an innovative structure that responds to the very latest scholarship. Its chapters touch upon institutional and historical sources and analytical methods, how policy is made, how it is evaluated and how it is constrained. In these ways, the Handbook shows how the combined wisdom of political science as a whole can be brought to bear on political attempts to improve the human condition.
Spanning all of the major substantive areas and approaches in modern political science, this blockbuster set is a must-have for scholars and students alike. Each volume is crafted by a distinguished set of editors who have assembled critical, comprehensive, essays to survey accumulated knowledge and emerging issues in the study of politics. These volumes will help to shape the discipline for many years to come. * Theda Skocpol, Victor S. Thomas Professor of Government and Sociology, and Dean of the Graduate School of Arts and Sciences, Harvard University *
Judging from the editors, contributors, and topics covered, the forthcoming Oxford Handbooks of Political Science will be a landmark series...This is a series that not only university libraries, but more specialized social science and political science libraries, will want to have on their shelves * Robert O. Keohane, Professor of International Affairs, Princeton University *
This extraordinary series offers 'state of the art' assessments that instruct, engage, and provoke. Both synoptic and directive, the fine essays across these superbly edited volumes reflect the ambitions and diversity of political science. No one who is immersed in the discipline's controversies and possibilities should miss the intellectual stimulation and critical appraisal these works so powerfully provide. * Ira Katznelson, Ruggles Professor of Political Science and History, Columbia University *
Under the general editorship of Robert E. Goodin, a large group of intellectually attractive authors has charted the entire field of political science in an unbiased multi-paradigmatic way. Minerva's owl would make a nice logo for this monumental collective work of the Oxford Handbooks: what moves us forward is looking back at what we know. * Claus Offe, Professor of Political Science, Hertie School of Governance, Berlin and Institute for Social Science, Humboldt University, Berlin. *
a treasure-trove of useful informationGet this Handbook and its companion volumes...You will find it very thought-provoking! * Energy Bar Association Update *
PART 1. INTRODUCTION; PART II. INSTITUTIONAL AND HISTORICAL BACKGROUND; PART III. MODES OF POLICY ANALYSIS; PART IV. PRODUCING PUBLIC POLICY; PART V. INSTRUMENTS OF POLICY; PART VI. CONSTRAINTS ON PUBLIC POLICY; PART VII. POLICY INTERVENTION: STYLES AND RATIONALES; PART VIII. COMMENDING AND EVALUATING PUBLIC POLICIES; IX. PUBLIC POLICY, OLD AND NEW
NGR9780199548453
9780199548453
0199548455
The Oxford Handbook of Public Policy by Michael Moran (W. J. M. Mackenzie Professor of Government, University of Manchester)
Michael Moran (W. J. M. Mackenzie Professor of Government, University of Manchester)
Oxford Handbooks
New
Paperback
Oxford University Press
2008-06-12
996
N/A
Book picture is for illustrative purposes only, actual binding, cover or edition may vary.
This is a new book - be the first to read this copy. With untouched pages and a perfect binding, your brand new copy is ready to be opened for the first time
Trustpilot