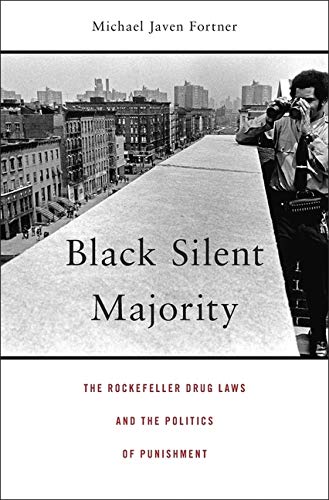 Aggressive policing and draconian sentencing have disproportionately imprisoned millions of African Americans for drug-related offenses. Michael Javen Fortner shows that in the 1970s these punitive policies toward addicts and pushers enjoyed the support of many working-class and middle-class blacks, angry about the chaos in their own neighborhoods.

Black Silent Majority: The Rockefeller Drug Laws and the Politics of Punishment by Michael Javen Fortner

Often seen as a political sop to the racial fears of white voters, aggressive policing and draconian sentencing for illegal drug possession and related crimes have led to the imprisonment of millions of African Americans-far in excess of their representation in the population as a whole. Michael Javen Fortner shows in this eye-opening account that these punitive policies also enjoyed the support of many working-class and middle-class blacks, who were angry about decline and disorder in their communities. Black Silent Majority uncovers the role African Americans played in creating today's system of mass incarceration.

Current anti-drug policies are based on a set of controversial laws first adopted in New York in the early 1970s and championed by the state's Republican governor, Nelson Rockefeller. Fortner traces how many blacks in New York came to believe that the rehabilitation-focused liberal policies of the 1960s had failed. Faced with economic malaise and rising rates of addiction and crime, they blamed addicts and pushers. By 1973, the outcry from grassroots activists and civic leaders in Harlem calling for drastic measures presented Rockefeller with a welcome opportunity to crack down on crime and boost his political career. New York became the first state to mandate long prison sentences for selling or possessing narcotics.

Black Silent Majority lays bare the tangled roots of a pernicious system. America's drug policies, while in part a manifestation of the conservative movement, are also a product of black America's confrontation with crime and chaos in its own neighborhoods.

Provocative... As Fortner's book makes clear, no political movement can afford to ignore the kind of cruel disorder that we euphemistically call common crime. A police force that kills black citizens is adding to America's history of racial violence; so is a police force that fails to keep them safe. -- Kelefa Sanneh * New Yorker *
Seeks to reverse the conventional wisdom about not only the Rockefeller laws themselves, but also the broader history of the war on drugs... After Black Silent Majority, historians can no longer reduce the '60s and '70s politics of crime to the delusional fantasies of racists or to statistical artifacts of modern police record-keeping (although those factors surely played a role as well). Fortner marshals an array of poll data showing that black city dwellers were-and not without reason-far more fearful of violence in the late 1960s than white suburbanites were. -- Sara Mayeux * Reason *
This provocative history alerts a rising generation of would-be reformers-the young masses that have recently filled the streets of New York and other cities to protest after each new tragedy-to how a well-intentioned proposal can lead to something unintended and disastrous, like mass incarceration. This lesson should resound, given the political clout the criminal-justice-reform movement continues to acquire. -- Jack Dickey * Time *
A fresh, bold, powerful book that shakes up a pressing contemporary debate. Fortner insists on listening to the black voices that supported the rise of our terrible incarceration policies. Through careful research, he describes a deeply conflicted community-confronting crime, groping for respectability, challenging the white gaze, and reaching for social justice. Black Silent Majority is forcefully argued, beautifully written, and profoundly moving. -- James A. Morone, author of Hellfire Nation and The Devils We Know
Meticulously researched, engagingly written, and rigorously argued, this important and long-overdue work will be essential reading for anyone concerned with the hidden complexities of African American life. Fortner illuminates the problems that the majority of working- and middle-class blacks face from criminal elements within their communities; the sometimes patronizing indifference of white and black liberals toward them, compounded by the manipulation of their concerns by conservatives; and the tragic, unintended consequences of a flawed drug and penal policy they were driven, out of despair and fury, to support. This is a major contribution to our understanding of the interaction of class, race, and public policy in America. -- Orlando Patterson, Harvard University
Michael Javen Fortner is Assistant Professor and Academic Director of Urban Studies at the CUNY School of Professional Studies, Murphy Institute.
NPB9780674743991
9780674743991
0674743997
Black Silent Majority: The Rockefeller Drug Laws and the Politics of Punishment by Michael Javen Fortner
Michael Javen Fortner
New
Hardback
Harvard University Press
20150924
368
Winner of Herbert H. Lehman Award 2016 Nominated for Littleton-Griswold Prize 2016 Nominated for J. David Greenstone Book Prize 2016 Nominated for James Willard Hurst Prize 2016 Nominated for Best Book Award in Race, Ethnicity, and Politics 2016 Nominated for Kenneth Jackson Award 2016 Nominated for Best Book in Urban Affairs Award 2017 Nominated for Pulitzer Prizes 2016 Nominated for BCALA Literary Awards 2016 Nominated for Goldsmith Book Prize 2016
Book picture is for illustrative purposes only, actual binding, cover or edition may vary.
This is a new book - be the first to read this copy. With untouched pages and a perfect binding, your brand new copy is ready to be opened for the first time
Trustpilot