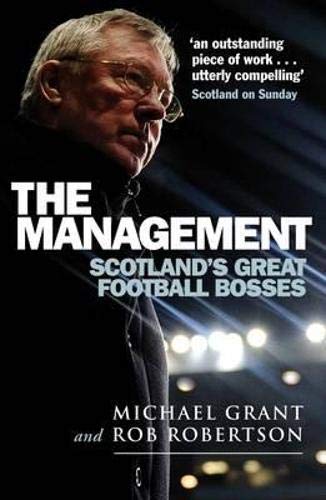 The Management by Michael Grant

A lively account of the Scottish football managers who brought their skills and personalities to bear on the beautiful game at home and abroad.

In exclusive interviews with Sir Alex Ferguson, George Graham, Jim McLean, Eddie Turnbull, Graeme Souness, Gordon Strachan, Kenny Dalglish, David Moyes, Alex McLeish and Walter Smith, as well as a host of others, Michael Grant and Rob Robertson reveal the huge contribution Scots managers have made to the world game. The first book of its kind, this clever, original, and brilliantly realised analysis presents fascinating accounts of each man, profiling their history, the clubs they've served, their individual strengths and weaknesses, and their impact on the game itself. It is a deeply researched and compelling work which also presents illuminating material on legendary names from the past, such as Sir Matt Busby, Jock Stein and Bill Shankly, while exploring the real personalities of the Scottish managerial game, men like Jim Leishman, John Lambie and Steve Paterson who brought both laughter and tragedy to the dressing room.
With a special section on Scots who managed the Old Firm, it also shows for the first time how Scottish coaches have spread their football gospel all round the world and why places such as Brazil, Italy and the Czech Republic have them to thank for driving forward their domestic game. Insightful, measured, revealing and utterly unique, this is a must-read for football fans the world over.
Michael Grant has been a football writer for over two decades and covered Scottish club and international football all over the world, including three World Cups and three European Championships. He worked in Inverness before moving to the Press & Journal in Aberdeen and then, in 1999, becoming chief football writer of The Sunday Herald. He has been chief football writer of The Herald since 2009. He suspects 1983 was as good as football can get. Rob Robertson is an award-winning staff sports writer with The Scottish Daily Mail. He is a former Scotland Young Journalist of the Year and Scotland Campaigning Journalist of the Year and has held staff jobs at top Scottish newspapers including the Aberdeen Evening Express, the Glasgow Evening Times, the Edinburgh Evening News, Scottish Sunday Mail and The Herald. Rob has previously written books on the rise of Scottish tennis star Andy Murray, the inside story of how Vladimir Romanov took control of Heart of Midlothian football club and co-authored The Don, the autobiography of Willie Miller, also published by Birlinn.
GOR003484304
9781780270166
178027016X
The Management: Scotland's Great Football Bosses by Michael Grant
Michael Grant
Used - Very Good
Paperback
Birlinn General
2011-10-06
352
N/A
Book picture is for illustrative purposes only, actual binding, cover or edition may vary.
This is a used book - there is no escaping the fact it has been read by someone else and it will show signs of wear and previous use. Overall we expect it to be in very good condition, but if you are not entirely satisfied please get in touch with us
Trustpilot