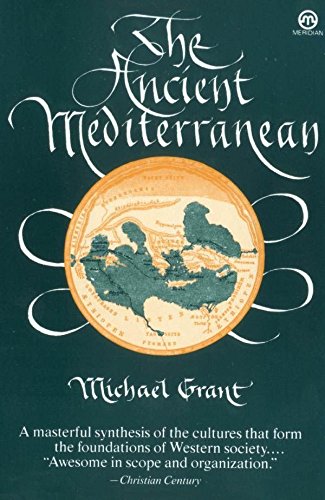 The Ancient Mediterranean by Michael Grant

The Ancient Mediterranean by Michael Grant

Written by eminent classical scholar Michael Grant. The Ancient Mediterranean is a wonderfully revealing, unusually comprehensive history of all the peoples who lived around the Mediterranean from about 15,000 B.C. to the time of Constantine (306-337 A.D.). Many volumes, including Professor Grant's own previous works, trace the histories of the great civilizations of Greece and Rome. But this unique work looks at the influences and cultures of the entire region, including Egypt, Israel, Crete, Carthage, Ionia and the Eastern colonies. Syria, and the Etruscans, as well as the Greek and Roman states.

Drawing on archaeology, geography, anthropology, and economics. Professor Grant shows how the great Oriental civilizations-Egypt, Assyria, Babylonia, Persia-originated attitudes and institutions ultimately passed on to the West. He describes the effect on the people and their achievements of the long, irregular coastline, the mountainous terrain surrounding small fertile plains, the typical plant life of olive and grape, and the rapidly changing weather. Further, he investigates how the demographic factors around this deep and stormy sea caused or influenced the great periods of ancient history, such as that of fifth-century Athens and of Rome in the first century A.D. Appealing and fascinating reading, this impeccably researched history brings a fresh perspective to understanding our ancient heritage.

Michael Grant (1914-2004) was a historian whose over forty publications on ancient Rome and Greece popularized the classical and early Christian world. He studied at Trinity College, Cambridge, served in British intelligence and as a diplomat during the Second World War, and afterward became deputy director of the British Council's European division, when he also published his first book. He later returned to academia, teaching at Cambridge and Edinburgh, and serving as Vice Chancellor at the University of Khartoum and at Queen's University, Belfast.
Preface
Part One: The Mediterranean in Early Times
1. The Mediterranean and its Beginnings
The Mediterranean and its lands; the earliest Mediterranean people; westwards to Israel and the Jordan Valley; south-eastern Asia Minor and the lower Orontes; earliest Cyprus, Crete, and Greece; first links with the Euphrates and Tigris

4. The Straits and the Aegean
Troy; Crete; the Mycenaeans

5. The Expansion of Israel, Phoenicia and Carthage
Philistines and Hebrews; Syria and Phoenicia; Carthage and the west
Part Two: The Greeks
6. The Homerica Age
The revival of Greece; the early Ionians; the sea

7. Greek Civilisation Enriched and Diffused
Hesiod and eastern ports; from Phrygia to Corinth; Greek art and the east; colonies in the west; Ionia and eastern colonies

8. Athens and Alexandria
Greek crops adn natural beauties; the zenith of Athens; the Athenian way of life; Philip, Alexander and Alexandria; Syria and the Aegean after Alexander
Part Three: The Romans
9. The Etruscans and the Beginnings of Rome
The Etruscans; the expansion of Etruscan power

GOR005552925
9780452010376
0452010373
The Ancient Mediterranean by Michael Grant
Michael Grant
Used - Good
Paperback
Penguin Putnam Inc
19880901
432
N/A
Book picture is for illustrative purposes only, actual binding, cover or edition may vary.
This is a used book - there is no escaping the fact it has been read by someone else and it will show signs of wear and previous use. Overall we expect it to be in good condition, but if you are not entirely satisfied please get in touch with us
Trustpilot