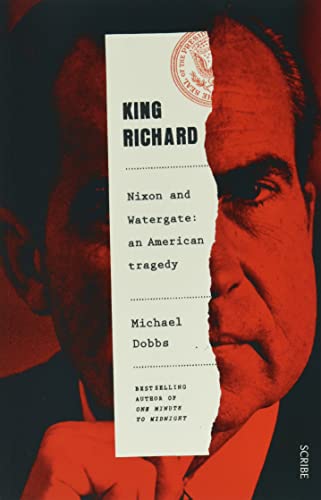 From an acclaimed British author, a sharply focused, riveting account - told from inside the White House - of the crucial days, hours, and moments when the Watergate conspiracy consumed, and ultimately toppled, a president.

In January 1973, Richard Nixon was inaugurated after winning re-election in a historic landslide. But by April his presidency had fallen apart as the Watergate scandal metastasised into what White House counsel John Dean called 'a full-blown cancer'. King Richard is the intimate, utterly absorbing narrative of the tension-packed hundred days when the Watergate burglars and their handlers in the administration turned on one another, revealing their direct connection to the White House.

Drawing on thousands of hours of newly released taped recordings, Michael Dobbs takes us into the very heart of the conspiracy, recreating these dramatic events in unprecedentedly vivid detail. He captures the growing paranoia of the principal players, and their desperate attempts to deflect blame, as the noose tightened around them and the daily pressures became increasingly unbearable. At the centre of this spellbinding drama is Nixon himself, a man whose strengths - particularly his determination to win at all costs - were also his fatal flaws. Structured like a classical tragedy with a uniquely American twist, this is an epic and deeply human story of ambition, power, and betrayal.

'Michael Dobbs is a master at narrative history. By focusing on the most critical 100 days of Watergate, and by sticking closely to the written and spoken record, Dobbs is able to bring to life the tragedy of Richard Nixon in a way no one else has. A truly gripping read and a moving portrait.'

-- Evan Thomas, author of Being Nixon

'The potent research and narrative skills of Michael Dobbs reach new heights in King Richard, his Shakespearean study of the endlessly compelling self-inflicted fall of Richard Nixon. Here again, as he did in his study of the Cuban Missile Crisis, Dobbs applies his signature technique of revealing character through the dramatic compression of time. It makes for illuminating and addictively readable history.'

'Rich and kaleidoscopic ... In [Dobbs'] wry and absorbing narrative I sensed an ironic dimension ... A portrait of a petulant, insecure man who fancied himself king, or something like it ... King Richard distinguishes itself in part by limiting its narrative mostly to the first hundred days after Nixon's second inauguration ... This circumscribed frame allows Dobbs to deploy his observational gifts to full effect ... Out of this raw material, Dobbs has carved out something intimate and extraordinary, skilfully chiseling out the details to bring the story to lurid life.'

'The unraveling of Richard Nixon's presidency plays out in intimate detail in this vivid recreation of a key period in the Watergate scandal ... An indelible study of a political antihero.'

'Spellbinding ... Masterful ... The author delivers an intimate, engrossing picture of Nixon as a visionary man obsessed with privacy and solitude, an affectionate husband and father, and a gut-fighting outsider mystified by power and all its trappings, styling himself as a kind of blend of Abraham Lincoln, Benjamin Disraeli, and Charles de Gaulle. A riveting portrait of ambition, hubris, betrayal, and the downfall of an American president.'

'This is a compelling, moment-by-moment narrative, psychological as much as political, offering a sense of intimacy with the beleaguered Nixon without mawkishness.'

'The strength of the work stems from Dobbs's bringing lesser-known events into clear focus ... Spanning biography and history, this is a gripping narrative and a fine account of events in the presidency. Recommended for readers unfamiliar with Watergate or in need of a refresher.'

'A balanced but frank account of a critical period in Richard Nixon's downfall and a valuable addition to the literature of this dramatic era in American political history ... Engrossing.'

'Donald Trump had tweets but Nixon had tapes: 3,700 hours of them ... They have proved a goldmine for Michael Dobbs...whose elegantly written book, King Richard - Nixon and Watergate: An American Tragedy, zooms in on the hundred days that followed Nixon's second inauguration and led to his downfall.'

'Elegant and convincing ... Dobbs's description of the fledgling relationship between the two superpowers is unerringly fascinating.'

'[S]uperbly evocative ... So vivid is the writing that you can practically feel the shuddering vibration and turbulence in what was then the state-of-the-art aircraft carrying Roosevelt on the first visit by an American president to the Soviet Union.'

'Elegantly written ... Dobbs delivers engaging portraits of the national leaders ... A confident and rewarding survey of a hinge point in 20th century history.'

'A book with sobering new information about the world's only superpower nuclear confrontation - as well as contemporary relevance ... Filled with insights that will change the views of experts and help inform a new generation.'

'Did we need another book on the Cuban Missile Crisis of 1962? Anyone reading One Minute to Midnight will quickly realise that we did need another - and that this is it. This is unquestionably the most complete and accurate account of the crisis that we have, and will no doubt long remain so. Michael Dobbs has managed to combine the careful and thorough research of a scholar into the ability of an able journalist to bring his findings to life in a dramatic story that illuminates the historical events it examines with lively characterisation of the people who made up the cast of the drama. It is first rate great history and a great read!'

'At a time of danger for a nation it is important for political leaders first to think, then to think more and try avoid shooting. This book gives a day by day perspective on how two world leaders, John Kennedy and Nikita Khrushchev, showed their ability to manage a crisis. Thanks to them, humanity survived and we are able to read this book.'

'An author who can bring historical happenings so vitally back to life and made all the more impressive by being historically accurate in every respect.'

'Dobbs takes us so far inside the mind of Winston Churchill that we feel as though we actually are him.'

* Publishers Weekly *
Michael Dobbs was born and educated in Britain, but is now a US citizen. He was a long-time reporter for The Washington Post, covering the collapse of communism as a foreign correspondent, and he has taught at Princeton, Georgetown, and the University of Michigan. The author of a Cold War trilogy that includes Down with Big Brother, One Minute to Midnight, and Six Months in 1945, he lives outside Washington, DC.
GOR011636011
9781913348731
1913348733
King Richard: Nixon and Watergate: an American tragedy by Michael Dobbs
Michael Dobbs
Used - Very Good
Paperback
Scribe Publications
20210610
416
null null null null null null null null null null
Book picture is for illustrative purposes only, actual binding, cover or edition may vary.
This is a used book - there is no escaping the fact it has been read by someone else and it will show signs of wear and previous use. Overall we expect it to be in very good condition, but if you are not entirely satisfied please get in touch with us
Trustpilot