The Wrong Side of Goodbye Michael Connelly 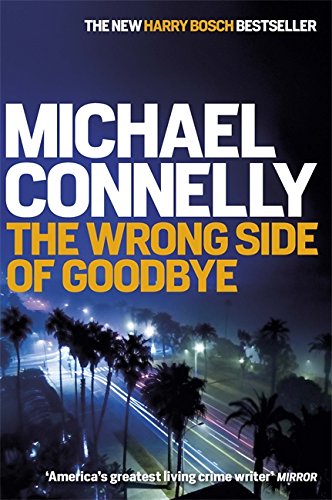 The Wrong Side of Goodbye by Michael Connelly

The Wrong Side of Goodbye by Michael Connelly

'What do you want me to do?' Bosch asked again.

'I want you to find someone for me,' Vance said. 'Someone who might not have ever existed.'

Harry Bosch is working as a part-time detective in the town of San Fernando outside of Los Angeles, when he gets the invitation to meet with the ageing aviation billionaire Whitney Vance. When he was eighteen Vance had a relationship with a Mexican girl called Vibiana Duarte, but soon after becoming pregnant she disappeared.

Now, as he reaches the end of his life, Vance wants to know what happened to Vibiana and whether there is an heir to his vast fortune. And Bosch is the only person he trusts to undertake the assignment.

Harry's aware that with such sums of money involved, this could be a dangerous undertaking - not just for himself, but for the person he's looking for - but as he begins to uncover Vibiana's tragic story, and finds uncanny links to his own past, he knows he cannot rest until he finds the truth.

This is storytelling at its best from one of America's greatest living crime writers * DAILY EXPRESS *
Thriller of the Week * MAIL ON SUNDAY, EVENT *
Immensely satisfying.... A compelling homage to Raymond Chandler's Philip Marlowe and Los Angeles * DAILY MAIL *
Harry Bosch is one of American crime fiction's great detectives * IRISH TIMES *
Promises more very good things... A novel to keep, not throw away * THE TIMES *
A former police reporter for the Los Angeles Times, Michael Connelly is the internationally bestselling author of the Harry Bosch thriller series. The TV tie-in series - Bosch - is one of the most watched original series on Amazon Prime and is now in its third season. He is also the author of several bestsellers, including the highly acclaimed legal thriller, The Lincoln Lawyer, which was selected for the Richard & Judy Book Club in 2006, and has been President of the Mystery Writers of America. His books have been translated into thirty-nine languages and have won awards all over the world, including the Edgar and Anthony Awards. He spends his time in California and Florida. To find out more, visit Michael's website or follow him on Twitter or Facebook. www.michaelconnelly.com @Connellybooks f/MichaelConnellyBooks
GOR007988030
9781409147480
1409147487
The Wrong Side of Goodbye by Michael Connelly
Michael Connelly
Harry Bosch Series
Used - Very Good
Paperback
Orion Publishing Co
2016-10-18
400
N/A
Book picture is for illustrative purposes only, actual binding, cover or edition may vary.
This is a used book - there is no escaping the fact it has been read by someone else and it will show signs of wear and previous use. Overall we expect it to be in very good condition, but if you are not entirely satisfied please get in touch with us
Trustpilot