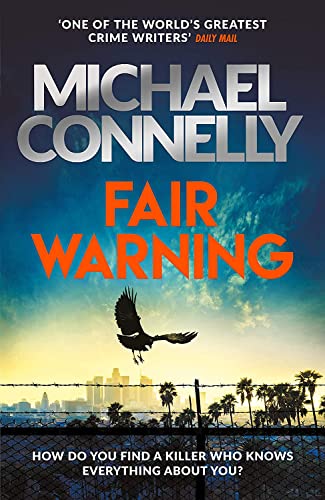 HOW DO YOU FIND A KILLER WHO KNOWS EVERYTHING ABOUT YOU?

'AS EXCITING AS ANYTHING CONNELLY HAS WRITTEN' THE TIMES

Jack McEvoy is a reporter with a track record in finding killers. But he's never been accused of being one himself.

Jack went on one date with Tina Portrero. The next thing he knows, the police are at his house telling Jack he's a suspect in her murder.

But as he uses his journalistic skills to open doors closed to the police, Jack walks a thin line between suspect and detective - between investigation and obsession - on the trail of a killer who knows his victims better than they know themselves...

Riveting, original and terrifying - this is a masterpiece from #1 bestseller Michael Connelly.

'The pre-eminent detective novelist of his generation' Ian Rankin

'A genius' Independent on Sunday

'No one writes a better modern thriller than Connelly' Evening Standard
The final hundred pages of this unnerving novel are as exciting as anything Connelly has written. * The Times *
More literary caviar from Connelly. -- Barry Forshaw * Financial Times *
Utterly compelling and tinged with loss, this is Connelly at the peak of his powers. * Mail on Sunday *
A rare outing for Jack McEvoy but my goodness, he's stumbled on an amazing story . . . mind-boggling * The Times *
Excellent and angry...McEvoy is a great character. Connelly writes easy prose and has the best journalists' skill of providing the right information at the right time * Literary Review *
A terrific writer with pace, style, and humanity to spare * Sunday Telegraph *
At the very top of the crime-writing tree * Daily Mail *
MICHAEL CONNELLY is the author of thirty-four previous novels, including the #1 New York Times bestsellers Dark Sacred Night, Two Kinds of Truth, and The Late Show. His books, which include the Harry Bosch series and the Lincoln Lawyer series, have sold more than eighty million copies worldwide. Connelly is a former newspaper reporter who has won numerous awards for his journalism and his novels. He is the executive producer of Bosch, starring Titus Welliver, and the creator and host of the podcast Murder Book. He spends his time in California and Florida. To find out more, visit Michael's website or follow him on Twitter or Facebook. www.michaelconnelly.com f/MichaelConnellyBooks [email protected]
GOR011092643
9781409199090
1409199096
Fair Warning: The Instant Number One Bestselling Thriller by Michael Connelly
Michael Connelly
Used - Very Good
Paperback
Orion Publishing Co
2021-01-21
480
N/A
Book picture is for illustrative purposes only, actual binding, cover or edition may vary.
This is a used book - there is no escaping the fact it has been read by someone else and it will show signs of wear and previous use. Overall we expect it to be in very good condition, but if you are not entirely satisfied please get in touch with us
Trustpilot