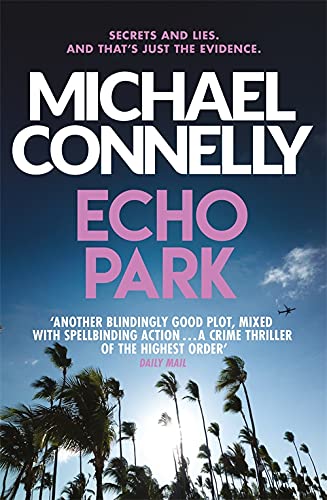 Bosch reopens the hunt for a psychotic killer who stalked the streets of Los Angeles years before. The superb twelfth Harry Bosch novel from the award-winning No. 1 bestselling author.

LAPD Detective Harry Bosch in a modern thriller from No. 1 bestseller Michael Connelly - author of THE LINCOLN LAWYER and ANGELS FLIGHT.

In 1993 Homicide Detective Harry Bosch was assigned the case of a missing person, Marie Gesto. The young woman was never found - dead or alive - and the case has haunted Bosch ever since.

Thirteen years later, Bosch is back in the Open Unsolved Crimes Unit when he gets a call from the DA's office. A man accused of two killings is willing to confess to several other murders in a deal to avoid the death penalty. One of his victims, he says, is Marie Gesto.

When investigating these previously unsolved crimes, Bosch begins to crack when he realises that he and his partner missed a clue that could have prevented the serial killer striking again.

Connelly's plots are never straightforward, and he keeps us guessing until the exciting and bitter conclusion to this latest episode in a splendid series * SUNDAY TELEGRAPH *
Connelly has produced another blindingly good plot which, mixed with spellbinding action, takes us deep into a corrupt world. Not for the first time do we discover that there is a very fine line indeed between criminals and the police. This is crime thriller writing of the highest order * GUARDIAN *
Admirers of Connelly's Bosch novels will know that his depiction of his dedicated hero always has the ring of authenticity. And, amid the excitements of his vertiginous plot, Connelly takes the time to consider whether Harry's determination to get his man is worth the sacrifices he makes * DAILY TELEGRAPH *
This is Connelly doing what he does best: delivering a beautifully structured, richly atmospheric crime novel * THE EXPRESS *
MICHAEL CONNELLY is the author of thirty-two previous novels, including the #1 New York Times bestsellers Dark Sacred Night, Two Kinds of Truth, and The Late Show. His books, which include the Harry Bosch series and the Lincoln Lawyer series, have sold more than seventy-four million copies worldwide. Connelly is a former newspaper reporter who has won numerous awards for his journalism and his novels. He is the executive producer of Bosch, starring Titus Welliver, and the creator and host of the podcast Murder Book. He spends his time in California and Florida. To find out more, visit Michael's website or follow him on Twitter or Facebook. www.michaelconnelly.com f/MichaelConnellyBooks [email protected]
GOR006929282
9781409156185
1409156184
Echo Park by Michael Connelly
Michael Connelly
Harry Bosch Series
Used - Very Good
Paperback
Orion Publishing Co
2014-11-06
416
N/A
Book picture is for illustrative purposes only, actual binding, cover or edition may vary.
This is a used book - there is no escaping the fact it has been read by someone else and it will show signs of wear and previous use. Overall we expect it to be in very good condition, but if you are not entirely satisfied please get in touch with us
Trustpilot