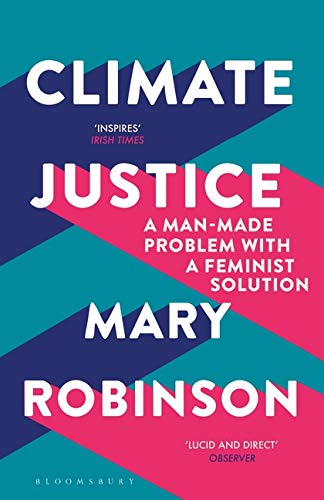 Climate Justice: A Man-Made Problem With a Feminist Solution by Mary Robinson

SHORTLISTED FOR THE IRISH BOOK AWARDS 2018 Holding her first grandchild in her arms in 2003, Mary Robinson was struck by the uncertainty of the world he had been born into. Before his fiftieth birthday, he would share the planet with more than nine billion people - people battling for food, water, and shelter in an increasingly volatile climate. The faceless, shadowy menace of climate change had become, in an instant, deeply personal. Mary Robinson's mission would lead her all over the world, from Malawi to Mongolia, and to a heartening revelation: that an irrepressible driving force in the battle for climate justice could be found at the grassroots level, mainly among women, many of them mothers and grandmothers like herself. From Sharon Hanshaw, the Mississippi matriarch whose campaign began in her East Biloxi hair salon and culminated in her speaking at the United Nations, to Constance Okollet, a small farmer who transformed the fortunes of her ailing community in rural Uganda, Robinson met with ordinary people whose resilience and ingenuity had already unlocked extraordinary change. Powerful and deeply humane, Climate Justice is a stirring manifesto on one of the most pressing humanitarian issues of our time, and a lucid, affirmative, and well-argued case for hope.
Robinson's lucid, direct style works because it gives a voice to those who have taken it upon themselves to tackle Earth's most pressing problems. The book's central message is a mantra worth repeating: individual local action can grow into a global idea, producing positive change * Observer *
Robinson's humility and compassion resonates through her story-telling ... Climate Justice inspires through its portrayals of resilience ... Robinson's stories provide a window into our own future, and her legacy on climate justice is a point of light in Ireland's otherwise dark record on climate change * Irish Times *
If there is one thing Mary Robinson's book demonstrates, it is the power of personal experience to change the world ... Presenting narratives in this way makes clear the issue at the heart of climate justice: it is consistently the least well-off who bear the brunt of global warming, and are the least well-equipped to deal with its consequences * Times Literary Supplement *
As an advocate for the hungry and the hunted, the forgotten and the ignored, Mary Robinson has not only shone a light on human suffering, but illuminated a better future for our world -- President Barack Obama
Addressing climate phenomena is the way to ensure justice for humanity. Mary Robinson, as UN Special Envoy on climate change & as UN High Commissioner for Human Rights, has been a global champion to bring justice for all. Her book inspires & guides us on what to do to protect humanity and our only world -- Ban Ki-moon, 8th UN Secretary General, Member of the Elders
The most dramatic symptoms of our changing global climate - rising sea levels, extreme weather events, increasing desertification, and water scarcity - disproportionately affect vulnerable communities that are often far removed from the causes of human greenhouse gas emissions. Mary Robinson has been their champion for many years, and Climate Justice gives them a voice that we all should hear. Robinson makes a powerful and compelling case that the climate crisis is a crisis of humanity, requiring far more than mitigation and adaptation, but a renewed sense of shared destiny. Simply put, climate action must work for the good of all, or it won't work for anyone -- Richard Branson
This is a book about people: farmers and activists in Africa, Asia, and the Americas, people whose livelihood is ruined by climate change and climate injustice. Yet it is also a celebration of their fight back. I was moved by Mary Robinson's account of amazing women leading the fight for their communities -- Mo Ibrahim
Sustainable development is at the heart of climate justice - protecting the planet, now and for generations to come. The stories in this book reveal the lived experience of people doing just that, adapting and strengthening their resilience in the face of climate change. They are courageous men and women whose lessons we all should heed -- Gro Harlem Brundtland
Mary Robinson brings the power of the voice of those heavily affected by climate change - particularly women - to the centre of the consciousness of decision-makers to propel collective action -- Graca Machel
Mary Robinson is President of the Mary Robinson Foundation - Climate Justice. She served in two capacities as the United Nations Secretary-General's Special Envoy on Climate Change. She is the former President of Ireland and United Nations High Commissioner for Human Rights, and is now a member of The Elders and the Club of Madrid. She has been awarded the U.S. Presidential Medal of Freedom and the 2019 Charleston John Maynard Keynes Prize.
GOR010126290
9781408888438
1408888432
Climate Justice: A Man-Made Problem With a Feminist Solution by Mary Robinson
Mary Robinson
Used - Very Good
Paperback
Bloomsbury Publishing PLC
2019-07-11
176
N/A
Book picture is for illustrative purposes only, actual binding, cover or edition may vary.
This is a used book - there is no escaping the fact it has been read by someone else and it will show signs of wear and previous use. Overall we expect it to be in very good condition, but if you are not entirely satisfied please get in touch with us
Trustpilot