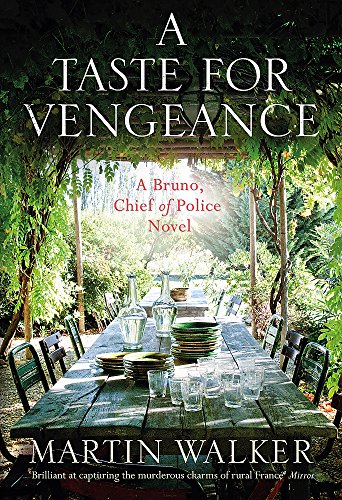 A Taste for Vengeance by Martin Walker

A Taste for Vengeance: The Dordogne Mysteries 11 by Martin Walker

'THE MAIGRET OF THE DORDOGNE' ANTONY BEEVOR

Bruno, now Chief of Police for the whole Vezere valley, has an unusual challenge to rise to: teaching at his friend Pamela's new cookery school. It is a daunting prospect - the disappearance of one of the school's pupils almost serves as a welcome distraction.

When the woman's body is discovered in one half of a double homicide, the evidence points to something far out of the ordinary. The other murder victim is a man, covered in combat scars and with a false passport. Investigations reveal a list of enemies as long as Bruno's arm. Any one of them would have had good reason to kill him - but which group managed it? And how did they find him?

As more of their mystery man's previous life is revealed, Bruno realizes that there may be more intended victims in the vicinity. Now he must conduct the biggest manhunt in St Denis' history to find the killers before they strike again.

A satisfyingly intriguing, wish-you-were-here read * Guardian *
The Alexander McCall Smith of la France profonde -- Francis Wheen
Walker's relaxed style and good humour help to bring to life his engaging hero and delightful home * Sunday Telegraph *
Brilliant at capturing the murderous charms of rural France * Mirror *
Martin Walker is a prize-winning journalist and the author of several acclaimed works of non-fiction, including The Cold War: A History. He lives in the Dordogne and Washington, DC.
GOR009181878
9781786486110
1786486113
A Taste for Vengeance: The Dordogne Mysteries 11 by Martin Walker
Martin Walker
The Dordogne Mysteries
Used - Very Good
Hardback
Quercus Publishing
2018-06-12
384
N/A
Book picture is for illustrative purposes only, actual binding, cover or edition may vary.
This is a used book - there is no escaping the fact it has been read by someone else and it will show signs of wear and previous use. Overall we expect it to be in very good condition, but if you are not entirely satisfied please get in touch with us
Trustpilot