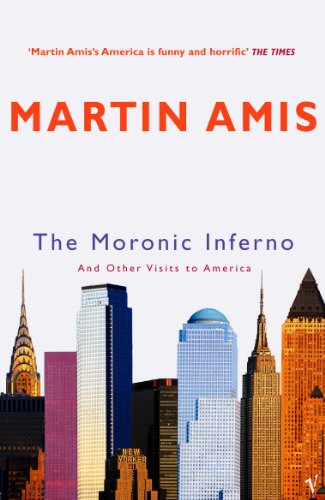 The Moronic Inferno by Martin Amis

At the age of ten, when Martin Amis spent a year in Princeton, New Jersey, he was excited and frightened by America.

The Moronic Inferno: And Other Visits to America by Martin Amis

At the age of ten, when Martin Amis spent a year in Princeton, New Jersey, he was excited and frightened by America. As an adult he has approached that confusing country from many arresting angles, and interviewed its literati, filmmakers, thinkers, opinion makers, leaders and crackpots with characteristic discernment and wit.

Included in a gallery of Great American Novelists are Norman Mailer, Gore Vidal, Truman Capote, Joseph Heller, William Burroughs, Kurt Vonnegut, John Updike, Paul Theroux, Philip Roth and Saul Bellow. Amis also takes us to Dallas, where presidential candidate Ronald Reagan is attempting to liaise with born-again Christians. We glimpse the beau monde of Palm Beach, where each couple tries to out-Gatsby the other, and examine the case of Claus von Bulow. Steven Spielberg gets a visit, as does Brian de Palma, whom Amis asks why his films make no sense, and Hugh Hefner's sybaritic fortress and sanitised image are penetrated.

There can be little that escapes the eye of Martin Amis when his curiosity leads him to a subject, and America has found in him a superlative chronicler.

Martin Amis's America is funny and horrific * The Times *
Perceptive, witty and felicitously written... A terrific book -- Frank Kermode * London Review of Books *
He writes brilliantly on novels and novelists. He has a laser-keen eye and an enviable descriptive power, using words with great originality and precision * Sunday Telegraph *
As a foreign journalist-cum-essayist on America, Mr Amis has no equal * The Economist *
Martin Amis is the author of fourteen novels, two collections of stories and eight works of non-fiction. His novel Time's Arrow was shortlisted for the Booker Prize, for which his subsequent novel Yellow Dog was also longlisted, and his memoir Experience won the James Tait Black Memorial Prize. In 2008, The Times named him one of the 50 greatest writers since 1945. He lives in New York.
GOR001792038
9780099461869
0099461862
The Moronic Inferno: And Other Visits to America by Martin Amis
Martin Amis
Used - Very Good
Paperback
Vintage Publishing
2006-01-05
256
N/A
Book picture is for illustrative purposes only, actual binding, cover or edition may vary.
This is a used book - there is no escaping the fact it has been read by someone else and it will show signs of wear and previous use. Overall we expect it to be in very good condition, but if you are not entirely satisfied please get in touch with us
Trustpilot