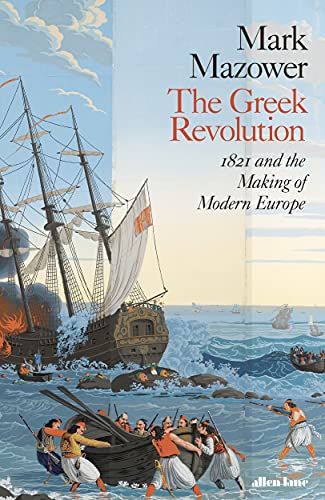 The Greek Revolution by Mark Mazower

The Greek Revolution: 1821 and the Making of Modern Europe by Mark Mazower

In the exhausted, repressive years that followed Napoleon's defeat in 1815, there was one cause that came to galvanize countless individuals across Europe and the United States: freedom for Greece.

Mark Mazower's wonderful new book recreates one of the most compelling, unlikely and significant events in the story of modern Europe. In the face of near impossible odds, the people of the villages, valleys and islands of Greece rose up against Sultan Mahmud II and took on the might of the imperial Ottoman armed forces, its Turkish cavalrymen, Albanian foot soldiers and the fearsome Egyptians. Despite the most terrible disasters, they held on until military intervention by Russia, France and Britain finally secured the kingdom of Greece.

Mazower brilliantly brings together the different strands of the story. He takes us into the minds of revolutionary conspirators and the terrors of besieged towns, the stories of itinerant priests, sailors and slaves, ambiguous heroes and defenceless women and children struggling to stay alive amid a conflict of extraordinary brutality. Ranging across the Eastern Mediterranean and far beyond, he explores the central place of the struggle in the making of Romanticism and a new kind of politics that had volunteers flocking from across Europe to die in support of the Greeks. A story of how statesmen came to terms with an even more powerful force than themselves - the force of nationalism - this is above all a book about how people decided to see their world differently and, at an often terrible cost to themselves and their families, changed history.

-- Julian Evans * Daily Telegraph *
Broad in scope and colorful in detail, this is a masterful portrait of a historic watershed. ... [A] sweeping history of Greece's 1821 war of independence against the Ottoman Empire. [Mazower] recounts the revolution's inception among Greek emigres with an idealistic dream of Hellenic nationalism and its actuality as a murky, eight-year struggle fought mainly by peasants and warlords who were motivated less by patriotism than by religious hatred of Muslims, factional vendettas, and mercenary self-interest ... A lucid, elegantly written, and often gripping account. * Publishers Weekly *
On the bicentennial of the Greek revolution, a prominent scholar tracks the historical detail and enormous international significance of the improbable, largely grassroots uprising against the Ottoman Empire. Mazower, a Columbia professor and winner of the Wolfson Prize for History who has written extensively about Greece and the Balkans, ably ties together the many disparate threads of this complex history of Greek independence. ... An elucidating history that is relevant to understanding the geopolitics of Greece today. * Kirkus Reviews *
Mark Mazower is Ira D. Wallach Professor of History at Columbia University where he directs the Institute for Ideas and Imagination. His previous books include Inside Hitler's Greece, Dark Continent, The Balkans and Salonica, City of Ghosts.
NGR9780241004104
9780241004104
0241004101
The Greek Revolution: 1821 and the Making of Modern Europe by Mark Mazower
Mark Mazower
New
Hardback
Penguin Books Ltd
2021-11-04
608
N/A
Book picture is for illustrative purposes only, actual binding, cover or edition may vary.
This is a new book - be the first to read this copy. With untouched pages and a perfect binding, your brand new copy is ready to be opened for the first time
Trustpilot