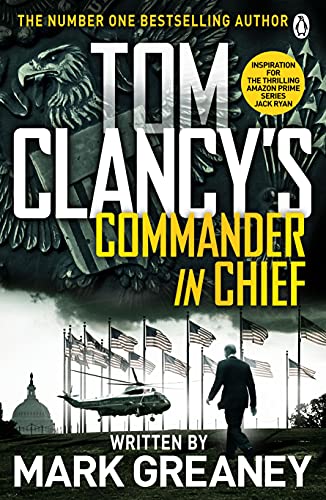 Russia is hurting. It's economy is tanking and its 'adventures' abroad have proved costly. President Volodin knows that his own survival depends on restoring Russian pride.

When a series of explosions, assassinations and attacks rock the global order, only one man in the West recognises the true cause of the chaos: American President Jack Ryan.

With Russian troops massing on Europe's borders, President Ryan cannot use military might without escalating conflict and playing into Volodin's hands. Instead he turns to his covert intelligence agencies.

They must uncover, infiltrate and neutralize each and every threat. But time is running out. And this war is about to go global . . .

'A brilliantly constructed thriller that packs a punch' Daily Mail

Exhilarating. No other novelist is giving so full a picture of modern conflict * Sunday Times *
Mark Greaney is the co-author of three Number One Sunday Times bestellers with Tom Clancy: Locked On, Threat Vector and Command Authority. In his research for these novels, Greaney travelled to seven countries and trained alongside military and law enforcement in the use of firearms, battlefield medicine and close-range combat tactics. He now writes for the Tom Clancy series of novels alongside Grant Blackwood. He lives in Memphis, Tennessee.
GOR007898983
9781405922180
1405922184
Tom Clancy's Commander-in-Chief: INSPIRATION FOR THE THRILLING AMAZON PRIME SERIES JACK RYAN by Mark Greaney
Mark Greaney
Used - Very Good
Paperback
Penguin Books Ltd
2016-09-30
768
N/A
Book picture is for illustrative purposes only, actual binding, cover or edition may vary.
This is a used book - there is no escaping the fact it has been read by someone else and it will show signs of wear and previous use. Overall we expect it to be in very good condition, but if you are not entirely satisfied please get in touch with us
Trustpilot