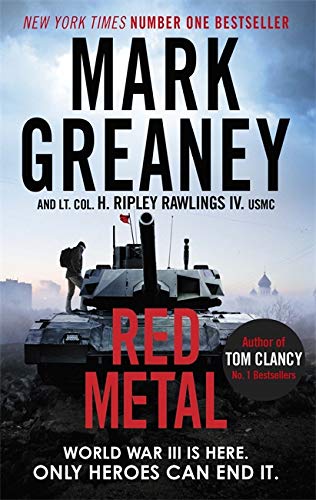 A desperate Kremlin takes advantage of a military crisis in Asia to simultaneously strike into Western Europe and invade east Africa in a bid to occupy three Rare Earth mineral mines that will give Russia unprecedented control over the world's hi-tech sector for generations to come.

Pitted against the Russians are a Marine lieutenant colonel pulled out of a cushy Pentagon job, a French Special Forces captain and his intelligence operative father, a young Polish partisan fighter, an A-10 Warthog pilot, and the commander of an American tank platoon who, along with his German counterpart, fight from behind enemy lines.

Through grand land, sea, and air battles to a small unit fighting hand-to-hand in the jungle, Russia and the US face off in a terrifying but thrilling battle for world dominance - with constant the threat of a Russian nuclear detonation ever present.

As with all of Greaney's work, this is a fun read. If only all our wars were fiction * Kirkus *
Think Red Storm Rising but ten times faster, with more action and Greaney's familiar, smooth style . . . Red Metal is a once-in-a-generation type thriller that is not to be missed * The Real Book Spy (blog) *
As in the best of this genre, there are no cartoon villains, just dedicated warriors who are given a mission and are determined to carry it out. This is powerful material, required reading for anyone interested in modern warfare * Publishers Weekly *
Mark Greaney (Author)
Mark Greaney has a degree in international relations and political science. In his research for the Gray Man novels, including Relentless, One Minute Out, Mission Critical, Agent in Place, Gunmetal Gray, Back Blast, Dead Eye, Ballistic, On Target, and The Gray Man, he traveled to more than fifteen countries and trained alongside military and law enforcement in the use of firearms, battlefield medicine, and close-range combative tactics. With Marine Lt Col Rip Rawlings, he wrote the New York Times bestseller Red Metal. He is also the author of the New York Times bestsellers Tom Clancy Support and Defend, Tom Clancy Full Force and Effect, Tom Clancy Commander in Chief, and Tom Clancy True Faith and Allegiance. With Tom Clancy, he co-authored Locked On, Threat Vector, and Command Authority.

GOR010127364
9780751578379
0751578371
Red Metal by Mark Greaney
Mark Greaney
Red Metal
Used - Very Good
Paperback
Little, Brown Book Group
20190716
656
null null null null null null null null null null
Book picture is for illustrative purposes only, actual binding, cover or edition may vary.
This is a used book - there is no escaping the fact it has been read by someone else and it will show signs of wear and previous use. Overall we expect it to be in very good condition, but if you are not entirely satisfied please get in touch with us
Trustpilot