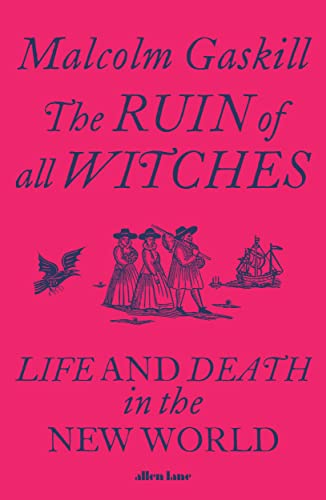 The Ruin of All Witches by Malcolm Gaskill

The Ruin of All Witches: Life and Death in the New World by Malcolm Gaskill

'The best and most enjoyable kind of history writing ... thought-provoking and absorbing' Hilary Mantel

'Breathtaking ... a great story, exquisitely told. This book is history at its illuminative best' Gerard DeGroot, The Times

'As compelling as a campfire story ... Gaskill brings this sinister past vividly to life' Erica Wagner, Financial Times

The dark, compelling history of a colonial witch-hunt, from the author of Witchfinders

In the frontier town of Springfield in 1651, peculiar things begin to happen. Precious food spoils, livestock ails and property vanishes. People suffer fits and are plagued by strange visions and dreams. Children sicken and die. As tensions rise, rumours spread of witches and heretics, and the community becomes tangled in a web of spite, distrust and denunciation. The finger of suspicion falls on a young couple struggling to make a home and feed their children: Hugh Parsons the irascible brickmaker and his troubled wife, Mary. It will be their downfall.

The Ruin of All Witches tells the dark, real-life folktale of witch-hunting in a remote Massachusetts plantation. These were the turbulent beginnings of colonial America, when English settlers' dreams of love and liberty, of founding a 'city on a hill', gave way to paranoia and terror, enmity and rage. Drawing on uniquely rich, previously neglected source material, Malcolm Gaskill brings to life a New World existence steeped in the divine and the diabolic, in curses and enchantments, and precariously balanced between life and death.

Through the gripping micro-history of a family tragedy, we glimpse an entire society caught in agonized transition between supernatural obsessions and the age of enlightenment. We see, in short, the birth of the modern world.

Malcolm Gaskill shows us with filmic vividness the daily life of the riven, marginal community of Springfield, where settlers from a far country dwell on the edge of the unknown. His attention to their plight - material, psychological, spiritual - goes far to explain, though not explain away, the alien beliefs of a fragile, beleaguered community, torn between the old world and the new. The clarity of his thought and his writing, his insight, and the immediacy of the telling, combine to make this the best and most enjoyable kind of history writing. Malcolm Gaskill goes to meet the past on its own terms and in its own place, and the result is thought-provoking and absorbing. -- Hilary Mantel
Breathtaking ... a great story, exquisitely told. I had to reread certain sentences aloud, just to savour their insight and cadence ... This book is history at its illuminative best. -- Gerard DeGroot * The Times *
The narrative is as compelling as a campfire story ... This is deeply atmospheric writing, carefully sourced ... As with the best history, the lessons of Springfield's past may serve to inform the citizens of a still-divided and conflicted nation. -- Erica Wagner * Financial Times *
Magnificent ... Gaskill's finely tuned story unfolds less like your average history book and more like a Stephen King novel. -- Suzannah Lipscomb * UnHerd *
An impressively researched account, bringing to life the fears and preoccupations of obscure and humble people, and setting them in the context of their time and place. -- Richard Francis * The Spectator *
PRAISE FOR WITCHFINDERS: 'A brilliant new study ... In the vivid three-dimensionality of its dramatis personae, the eloquence of its writing, and the richness of its evocations of vanished worlds of landscape and belief ... Gaskill displays a masterly wizardry all his own.' -- John Adamson * Sunday Telegraph *
He writes with sympathy, respect and deep human understanding. -- John Guy * Sunday Times *
A fine achievement. Gaskill has scoured the archives for every scrap of surviving evidence and presented his findings in an intelligent, meticulously documented, and highly readable way . . . As persuasive an account of the whole grisly episode as we are ever likely to get. -- Keith Thomas * New York Review of Books *
PRAISE FOR BETWEEN TWO WORLDS: 'A work of extraordinary scholarship. It captures the spirit of adventure and courage of the first settlers but also shows how high ideals were transformed by the harsh realities of life.' -- Rachel Trethewey * Independent *
Malcolm Gaskill is Emeritus Professor of Early Modern History at the University of East Anglia. One of Britain's leading experts in the history of witchcraft, his works include the highly acclaimed Witchfinders: A Seventeenth-Century English Tragedy and Between Two Worlds: How the English Became Americans.
NPB9780241413388
9780241413388
0241413389
The Ruin of All Witches: Life and Death in the New World by Malcolm Gaskill
Malcolm Gaskill
New
Hardback
Penguin Books Ltd
2021-11-04
336
N/A
Book picture is for illustrative purposes only, actual binding, cover or edition may vary.
This is a new book - be the first to read this copy. With untouched pages and a perfect binding, your brand new copy is ready to be opened for the first time
Trustpilot