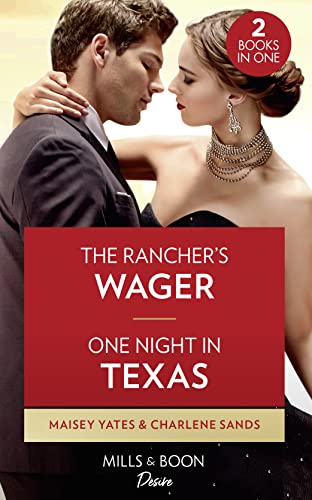 The Rancher's Wager / One Night In Texas by Maisey Yates

The Rancher's Wager by Maisey Yates

This wealthy rancher has placed his bet... And its winner takes all!

The Rancher's Wager by Maisey Yates

This wealthy rancher has placed his bet... And its winner takes all!

No one gets under Jackson Cooper's skin like fellow ranch owner Cricket Maxfield. Now, at a charity poker game, the stakes get personal and Jackson finds himself on the losing end. Paying up means being the ranch hand at Cricket's beck and call. But in close quarters the fire between them ignites into a passion that won't be ignored...

One Night in Texas by Charlene Sands

She was an employee's daughter. He was the heir.

Gracie Diaz is no longer a young girl watching the Wingate family from afar. She's a woman of means after a lucky lottery win. And she's pregnant with Sebastian Wingate's child, thanks to a red-hot night. But his family has nearly lost everything. Is he seducing her just to use her newfound wealth?

Maisey Yates is a New York Times bestselling author of over one hundred romance novels. Whether she's writing strong, hard working cowboys, dissolute princes or multigenerational family stories, she loves getting lost in fictional worlds. An avid knitter with a dangerous yarn addiction and an aversion to housework, Maisey lives with her husband and three kids in rural Oregon. Check out her website, maiseyyates.com or find her on Facebook. Charlene Sands is a USA Today bestselling author of 35 contemporary and historical romances. She's been honored with The National Readers' Choice Award, Booksellers Best Award and Cataromance Reviewer's Choice Award. She loves babies,chocolate and thrilling love stories.Take a peek at her bold, sexy heroes and real good men! www.charlenesands.com and Facebook
GOR011075192
9780263282771
0263282775
The Rancher's Wager / One Night In Texas: The Rancher's Wager / One Night in Texas (Texas Cattleman's Club: Rags to Riches) by Maisey Yates
Maisey Yates
Used - Very Good
Paperback
HarperCollins Publishers
2020-12-10
384
N/A
Book picture is for illustrative purposes only, actual binding, cover or edition may vary.
This is a used book - there is no escaping the fact it has been read by someone else and it will show signs of wear and previous use. Overall we expect it to be in very good condition, but if you are not entirely satisfied please get in touch with us
Trustpilot