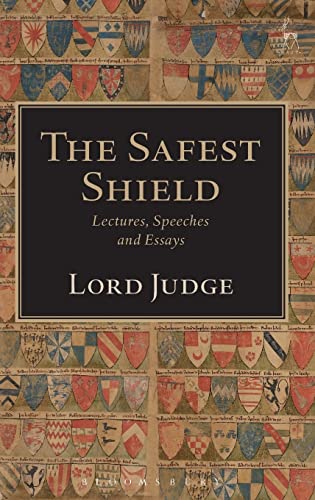 This selection of lectures, essays and speeches by Lord Judge, nearly all written when he was Lord Chief Justice of England and Wales, brings together his analysis of a wide range of topics which underpin the administration of justice and the rule of law. Apart from a few personal reflections, the discussion ranges from the development of our constitutional arrangements to matters of continuing constitutional uncertainty, with observations about different aspects of the court process and the discharge of judicial responsibilities. Based on Lord Judge's experience in the law and a deep interest in history, this selection offers sometimes uncomfortable, sometimes amusing, but always stimulating reading, and will provoke thoughtful reflection on and better understanding of the arrangements by which we are governed and the practical application of the rule of law.
... I have heard him deliver dozens of speeches of welcome and valediction to judges and lord justices of appeal. They have all been little short of miniature works of art, each marvellously crafted and carefully tailored to the honorand and the occasion, expressed with clarity, warmth and wit...he is one of our greatest Chief Justices [who was] responsible for leading the judiciary of England and Wales during a period of unprecedented difficulties and challenges. -- Lord Dyson, Master of the Rolls
At the Conference of Commonwealth Lawyers [he] captivated, charmed, inspired and pricked the conscience of every one of the hundreds of people in that auditorium...As a white baron he addressed a predominantly black, male, African audience on the subject of apartheid and its consequences, especially for women. He commanded their attention and their respect and moved them to tears and to two standing ovations. He spoke with extreme emotion and power. -- Maura McGowan QC, Chair of the Bar Council
Lord Judge was not just any old judge, but was a model occupant of an ancient office that is more than 700 years old. -- Philip Johnston * The Daily Telegraph *
Though he had an uncanny knack of knowing exactly what the public was thinking - about crime, about sentencing and much else - he was always the judge's judge ...Little wonder then that, when he had delivered his last formal judgment as lord chief justice, he was treated to something I have never before encountered in a court of law: nearly 300 people rising as one and breaking into sustained, whole-hearted applause. -- Joshua Rozenberg * The Guardian *
I was superbly entertained, informed and mesmerised by the lucid, thought-provoking and able contribution put forward by the author, at a time when he was Lord Chief Justice, on a legion of themes, not least on the subjects of the evidence on children, sentencing, advocacy, human rights, judicial independence and the liberty of the subject tributary to the rule of law. -- Gilles Renaud * Criminal Law Journal *
[Lord] Judge has an accessible and relaxed style, which ensures that the reader is immediately engaged and carried along by these pieces. However, the style also results in the reader almost being taken unawares by the depth and breadth of the author's scholarship; his deep attachment to his country, its history and its institutions; and his passionate commitment to justice and the rule of law. -- Lord Neuberger * The Middle Templar Magazine *
[These] writings resonate with history as well as humanity. -- Michael Beloff QC * The Times Literary Supplement *
Lord Judge was first appointed a Judge of the High Court in 1988 and was Lord Chief Justice and Head of the Judiciary of England and Wales from 2008 until 2013.
A. Towards a Constitution 1. Magna Carta: Luck or Judgment 2. William Marshal, Earl of Pembroke 3. 1361 and All that 4. Authorised Version of the Bible: Divine Right 5. No Taxation without Representation: A British Perspective on Constitutional Arrangements B. Continuing Constitutional Concerns 6. Constitutional Change: Unfinished Business 7. Sovereignty: A View from London 8. Parliamentary Self Government 9. Henry VIII Clauses 10. Assisted Suicide: Moral and Constitutional Issues C. The Judiciary 11. Judicial Independence and Responsibilities 12. Being a Judge in 2013 13. Judicial Training: Reflections on the Past and Thoughts for the Future 14. Encouraging Diversity D. Liberties and Rights 15. Equality Before the Law 16. Human Rights: Today and Tomorrow 17. The Judiciary and the Media 18. Press Regulation 19. The Welsh Language: Some Reflections E. Administration of Justice 20. The Art of Advocacy 21. Trial by Jury 22. Half a Century of Change: The Evidence of Child Victims 23. The Evidence of Child Victims: the Next Stage 24. Expert Evidence 25. Miscarriages of Justice 26. The Sentencing Decision F. Personal Reflections 27. Celebration of the Diamond Jubilee and Her Majesty the Queen 28. Catastrophic Spinal Injuries 29. History of the Middle Temple (Foreword) 30. The Future of the Inn: the Middle Temple 31. Why Read Law? 32. Reginald Walter Michael Dias 33. Induction Seminar: Welcome 34. David Thomas 35. Our Independent Judiciary
GOR007861407
9781509901890
1509901892
The Safest Shield: Lectures, Speeches and Essays by Lord Igor Judge (former Lord Chief Justice)
Lord Igor Judge (former Lord Chief Justice)
Used - Very Good
Hardback
Bloomsbury Publishing PLC
20151119
384
N/A
Book picture is for illustrative purposes only, actual binding, cover or edition may vary.
This is a used book - there is no escaping the fact it has been read by someone else and it will show signs of wear and previous use. Overall we expect it to be in very good condition, but if you are not entirely satisfied please get in touch with us
Trustpilot