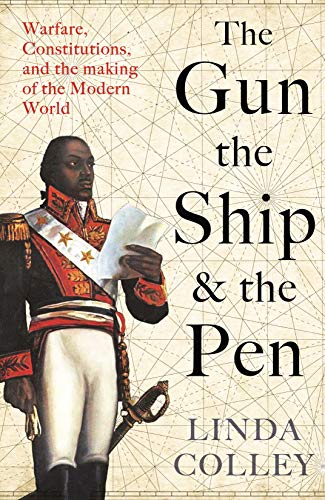 The Gun, the Ship, and the Pen by Linda Colley

Award-winning historian Linda Colley shows the dawn of the modern world - through the advance of written constitutions.

The Gun, the Ship, and the Pen: Warfare, Constitutions and the Making of the Modern World by Linda Colley

'If there were a Nobel Prize in History, Colley would be my nominee' Jill Lepore, New Yorker Starting not with the United States, but with the Corsican constitution of 1755, The Gun, the Ship, and the Pen moves through every continent, disrupting accepted narratives. Both monarchs and radicals play a role, from Catherine the Great of Russia, with her remarkable Nakaz, to Sierra Leone's James Africanus Horton, to Tunisia's Khayr-al-Din, a creator of the first modern Islamic constitution. Throughout, Colley demonstrates how constitutions evolved in tandem with warfare, and how they have functioned to advance empire as well as promote nations, and worked to exclude as well as liberate. Whether reinterpreting Japan's momentous 1889 constitution, or exploring the significance of the first constitution to enfranchise all adult women on Pitcairn Island in the Pacific in 1838, this is one of the most original global histories in decades.
Incandescent, paradigm-shifting ... Colley has upended much of what historians believe about the origins of written constitutions ... If there were a Nobel Prize in History, Colley would be my nominee -- Jill Lepore * New Yorker *
One of the most exciting historians of her generation, but also one of the most interesting writers of non-fiction around -- William Dalrymple * Guardian *
Linda Colley is a historian of her time; but she is also a completely original intelligence -- R. F. Foster
A book of stupendous range and originality, The Gun, the Ship, and the Pen delivers an ambitious new account of the making of the modern world. Linda Colley has an unparalleled ability to bring together the histories of ideas, politics, and people, and to distill prodigious learning into a narrative that is at once incisively argued and an immense pleasure to read. Rippling with fresh interpretations, startling connections, and remarkable stories, this is a masterpiece of global history by one of the greatest historians working today -- Maya Jasanoff, Harvard University
In this ambitious work, Linda Colley seeks to rethink the "long" nineteenth century through the prism of the many constitutions it produced. Written with characteristic vigor and clarity, her book shows the continued validity of "big picture" history in asking searching questions and providing unexpected answers -- Sanjay Subrahmanyam, author of * Europe's India, Words, People, Empires, 1500-1800 *
The purest crystallization of modern politics is the written constitution. Despite its lofty ideals, the document's many guises across the world repeatedly failed to meet their stated aspirations. Remarkable therefore are our centuries of persistent belief in constitutions. With her characteristic skill, erudition, and creativity, Linda Colley, one of our greatest historians, explains this seeming conundrum through a history of the durability of human hope, war, and political imagination. This is a monumentally important book -- Alan Mikhail, author of * God's Shadow: Sultan Selim, His Ottoman Empire, and the Making of the Modern World *
In this bold, lucid, and wide-ranging book, Linda Colley reveals the international dialogue that created our age of constitutions. She insightfully embeds the emergence of new modes of governance in the global interplay of mass literacy with mass warfare. Colley helps us understand the true origins and growing importance of constitutional government. -- Alan Taylor, author of * Thomas Jefferson's Education *
A marvelous tour with a brilliant guide through world history in search of the early adopters of written constitutions --a thoroughly enjoyable read! -- Mary Bilder, author of * Madison's Hand: Revising the Constitutional Convention *
From the Mediterranean to Japan, a dazzling, beautifully-written and surprising tale to discover the deep connections between the transformations of modern warfare and the rise of constitutions across the globe. A must read. -- M'hamed Oualdi, Sciences Po, Paris
Rarely is a history so satisfyingly broad in outlook while avoiding abstraction and generalisation. It is rich, enjoyable, enlightening and imaginative. Colley takes you on intellectual journeys you wouldn't think to take on your own, and when you arrive you wonder that you never did it before. -- David Aaronovitch * the Times *
Fascinating ... Most historians emphasise literacy and liberty, seeing constitutions as the product of high-minded, slightly bloodless political salons. Colley's approach is more imaginative [with] plenty of memorably colourful details ... A different, surprising twist on international history -- Dominic Sandbrook * Sunday Times *
Wildly ambitious, prodigiously researched ... The narrative ranges widely and fascinatingly across continents and prominent historical figures ... A sweeping, unique, truly world-spanning political and military history * Kirkus Reviews *
Linda Colley is Shelby M.C. Davis 1958 Professor of History at Princeton University and a Fellow of the British Academy. Among her seven books, are the award-winning Britons: Forging the Nation, the highly-acclaimed The Ordeal of Elizabeth Marsh: A Woman in World History, and Acts of Union and Disunion for Profile, which was based on a fifteen-part BBC Radio series.
GOR011514294
9781846684975
1846684978
The Gun, the Ship, and the Pen: Warfare, Constitutions and the Making of the Modern World by Linda Colley
Linda Colley
Used - Like New
Hardback
Profile Books Ltd
2021-03-11
512
N/A
Book picture is for illustrative purposes only, actual binding, cover or edition may vary.
The book has been read, but looks new. The book cover has no visible wear, and the dust jacket is included if applicable. No missing or damaged pages, no tears, possible very minimal creasing, no underlining or highlighting of text, and no writing in the margins
Trustpilot