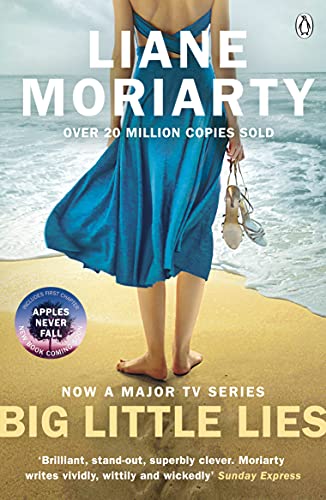 Jane hasn't lived anywhere longer than six months since her son was born five years ago. She keeps moving in an attempt to escape her past. Now the idyllic seaside town of Pirriwee has pulled her to its shores and Jane finally feels like she belongs.

Big Little Lies: The No.1 bestseller behind the award-winning TV series by Liane Moriarty

THE NO.1 BESTSELLER BEHIND THE AWARD WINNING TV SENSATION

Single mum Jane has just moved to town. She's got her little boy in tow - plus a secret she's been carrying for five years.

On the first day of the school run she meets Madeline - a force to be reckoned with, who remembers everything and forgives no one - and Celeste, the kind beautiful woman who makes the world stop and stare, but is inexplicably ill at ease. They both take Jane under their wing - while careful to keep their own secrets under wraps.

But a minor incident involving the children of all three women rapidly escalates: playground whispers become spiteful rumours until no one can tell the truth from the lies.

'Blame and guilt, forgiveness and retribution, love and betrayal. A tense, page-turning story . . . a great read' Mail on Sunday

'Blending romance, comedy and mystery, this is a wonderful book - full of brains, guts and heart' Sunday Mirror

'A hell of a good book. Funny and scary' Stephen King

Every single one of her books is a great read * E! Online *
An exceptional novel about murder and domestic and sexual violence that somehow defies expectation and remains upbeat. Twisty and unexpected, it's both comical and mysterious * Adele Parks, Big Issue *
Brilliant, stand-out, superbly clever. Moriarty writes vividly, wittily and wickedly * Sunday Express *
A nuanced psychological study of the elements of motherly and matrimonial behaviour * The Sunday Times *
It's a hell of a good book. Funny and scary. She nails the feuding moms -- Stephen King
Blame and guilt, forgiveness and retribution, love and betrayal. A tense page-turning story . . . a great read * Mail on Sunday *
Staggeringly brilliant . . . literally unputdownable -- Sophie Hannah
Blending romance, comedy and mystery, this is a wonderful book - full of brains, guts and heart * Sunday Mirror *
Absolutely brilliant, even better than The Husband's Secret. Loved it. Liane Moriarty has that rare Anne Tyler thing of being able to make fun of people while clearly having compassion for them. * Louise Candlish, Sunday Times bestselling author of SINCE I DON'T HAVE YOU *
Tolls a warning bell about the big little lies we tell to survive * Washington Post *
A fantastically nimble writer, so sure-footed that the book leaps between dark and light seamlessly * Entertainment Weekly *
The author of last year's bestseller, The Husband's Secret, is back with another sure-fire hit. Unputdownable * The Sun on Sunday *
It's not often that a book about murder mingled with domestic and sexual violence has you howling with laughter, but Moriarty pulls it off here ... Her ironic turn of phrases infuses even poignant moments with humour. Blending romance, comedy and mystery, this is a wonderful book - full of brains, guts and heart * The Sunday Mirror *
It all reads terrifyingly real, with the viciousness of the women at the school gates and the hell they can make each others' lives. It's a fine book * The Sunday Sport *
Moriarty is happy to thread a thin line between mummy lit and fluffy thriller. It's easy to get stuck into this book, thanks to neat plotting that keeps you guessing. Just dive right in because this book slips down as easily as a strawberry souffle * Irish Independent *
A brilliantly plotted story with characters to care for who kept me reading, utterly gripped * Woman and Home Magazine *
Here at Company HQ we're all obsessed with Little Lies by Liane Moriarty. This juicy seaside-town murder mystery will be one of the biggest books this autumn * Company Magazine *
This fantastically written story, with its little clues casually dropped in along the way, will keep you guessing until the very end ... Another compelling, funny and thought-provoking winner from Liane Moriarty. Do whatever you can to get your hands on a copy - it's brilliant * Heat Magazine *
Take this page-turner on holiday with you - you won't be able to put it down! * Closer Magazine *
A twisted thriller * Now Magazine *
Another riveting thriller. Tackling difficult subjects with intelligence and humanity * Hello Magazine *
A compelling summer read not to be missed * OK Magazine *
This addictive new thriller from bestselling author Liane Moriarty weaves three stories together to a shocking and unpredictable climax * Take A Break Magazine *
Liane Moriarty is the bestselling author of eight novels: Three Wishes, The Last Anniversary, What Alice Forgot, The Hypnotist's Love Story, The Husband's Secret, Big Little Lies, Truly Madly Guilty and Nine Perfect Strangers. The Husband's Secret is a worldwide bestseller which has sold more than three million copies and been translated into over forty languages. Big Little Lies is now an Emmy and Golden Globe-winning HBO series, produced by and starring Nicole Kidman and Reese Witherspoon. Liane lives in Sydney with her husband, son and daughter.
GOR006544988
9781405916363
1405916362
Big Little Lies: The No.1 bestseller behind the award-winning TV series by Liane Moriarty
Liane Moriarty
Used - Very Good
Paperback
Penguin Books Ltd
2015-05-07
496
N/A
Book picture is for illustrative purposes only, actual binding, cover or edition may vary.
This is a used book - there is no escaping the fact it has been read by someone else and it will show signs of wear and previous use. Overall we expect it to be in very good condition, but if you are not entirely satisfied please get in touch with us
Trustpilot