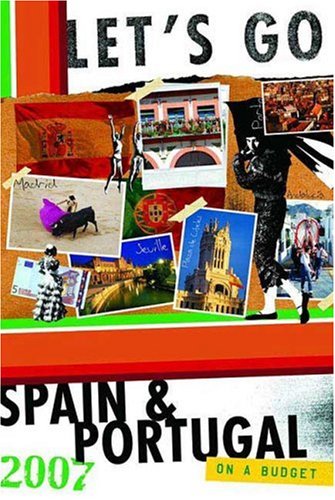 The only choice of guidebook for those travelling on a budget

Completely revised and updated for 2007, Let's Go Spain & Portugal is researched and compiled entirely by students who know first-hand how to see the world on the cheap, this guide has insider tips and information for the socially conscious traveller and is more useful and opinionated than ever.

Spain is a colorful and cultured playground offering equally generous portions of art, architecture, beaches, and nightlife. Its people have a laidback lifestyle of siestas and sangria and the wildly diverse regions assure something for everyone. Art lovers head for Barcelona and Bilbao in northern Spain, and between the two lies San Sebastian which boasts the most Michelin-starred chefs per capita in the world. Madrid is the pumping heart of late-night partying, while those seeking the sun drenched beaches head to the Mediterranean coast.

Spain's neighbour, Portugal, is often unjustly overshadowed. For those who visit, there are impressive imperial monuments in Lisbon, spectacular beaches and wild nightlife in the Algarve, and small inland towns that retain a timeless feel, with medieval castles overlooking rushing rivers and peaceful town squares.

Listings at all price levels for accommodation, food, attractions and more

Information on working, studying and volunteering in the region

'[The] ideal companion for the independent traveller' Sydney Sunday Telegraph

Researched, written and produced entirely by students with first-hand experience of budget travel.
GOR011352500
9780312360894
0312360894
Let's Go Spain & Portugal by Let's Go Inc
Let's Go Inc
Used - Well Read
Paperback
St Martin's Press
2006-12-01
800
N/A
Book picture is for illustrative purposes only, actual binding, cover or edition may vary.
This is a used book. We do our best to provide good quality books for you to read, but there is no escaping the fact that it has been owned and read by someone else previously. Therefore it will show signs of wear and may be an ex library book
Trustpilot