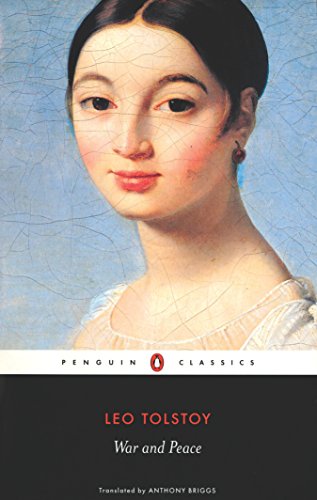 War And Peace by Leo Tolstoy

At a glittering society party in St Petersburg in 1805, conversations are dominated by the prospect of war. In this book, the author entwines grand themes - conflict and love, birth and death, free will and faith - with unforgettable scenes of nineteenth-century Russia, to create a magnificent epic of human life in its imperfection and grandeur.

War And Peace by Leo Tolstoy

'A book that you don't just read, you live' Simon Schama

Tolstoy's magnificent epic begins at a glittering society party in St Petersburg in 1805, where conversations are dominated by the prospect of war. Terror swiftly engulfs the country as Napoleon's army marches on Russia, and the lives of three young people are changed forever. The stories of quixotic Pierre, cynical Andrey and impetuous Natasha interweave with a huge cast, from aristocrats and peasants to soldiers and Napoleon himself, in a novel of conflict and love, birth and death, free will and fate, and human life in all its imperfection and grandeur.

"There remains the greatest of all novelists--for what else can we call the author of War and Peace?" --Virginia Woolf

Leo Tolstoy (1828-1910) was born in Tula province and was educated privately and at Kazan University. In 1851 he went to the Caucasus, joined an artillery regiment & began his literary career. After marrying in 1862, he began writing War and Peace, which was finished in 1869. His second great work, Anna Karenina, was finished in 1876. Professor Tony Briggs is former Professor of Russian at the University of Birmingham, and is the author of six books on Russian literature.

Professor Tony Briggs is former Professor of Russian at the University of Birmingham, has translated widely from the Russian, especially Pushkin, and is the author of several critical books on Russian literature. Orlando Figes is Professor of History at Birkbeck and the author of A People's Tragedy: The Russian Revolution, 1891-1924, which was awarded the Wolfson Prize for History and, most recently, Natasha's Dance: A Cultural History of Russia.

GOR001389982
9780140447934
0140447938
War And Peace by Leo Tolstoy
Leo Tolstoy
Used - Very Good
Paperback
Penguin Books Ltd
2007-09-27
1440
N/A
Book picture is for illustrative purposes only, actual binding, cover or edition may vary.
This is a used book - there is no escaping the fact it has been read by someone else and it will show signs of wear and previous use. Overall we expect it to be in very good condition, but if you are not entirely satisfied please get in touch with us
Trustpilot