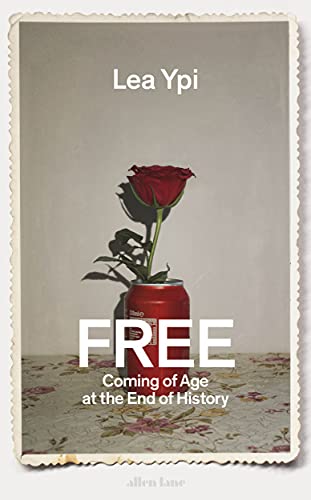 Free: Coming of Age at the End of History by Lea Ypi

***SHORTLISTED FOR THE BAILLIE GIFFORD PRIZE FOR NON-FICTION***

'Wonderfully funny and poignant. . . a tale of family secrets and political awakening amid a crumbling regime. One of the nonfiction titles of the year' Luke Harding, Observer

'Astonishing and deeply resonant . . . Ypi weaves magic in this book: I was entranced from beginning to end' Laura Hackett, Sunday Times

'I never asked myself about the meaning of freedom until the day I hugged Stalin. From close up, he was much taller than I expected.'

Lea Ypi grew up in one of the most isolated countries on earth, a place where communist ideals had officially replaced religion. Albania, the last Stalinist outpost in Europe, was almost impossible to visit, almost impossible to leave. It was a place of queuing and scarcity, of political executions and secret police. To Lea, it was home. People were equal, neighbours helped each other, and children were expected to build a better world. There was community and hope.

Then, in December 1990, a year after the fall of the Berlin Wall, everything changed. The statues of Stalin and Hoxha were toppled. Almost overnight, people could vote freely, wear what they liked and worship as they wished. There was no longer anything to fear from prying ears. But factories shut, jobs disappeared and thousands fled to Italy on crowded ships, only to be sent back. Predatory pyramid schemes eventually bankrupted the country, leading to violent conflict. As one generation's aspirations became another's disillusionment, and as her own family's secrets were revealed, Lea found herself questioning what freedom really meant.

Free is an engrossing memoir of coming of age amid political upheaval. With acute insight and wit, Lea Ypi traces the limits of progress and the burden of the past, illuminating the spaces between ideals and reality, and the hopes and fears of people pulled up by the sweep of history.

Riveting. . . A wonderfully funny and poignant portrait of a small nation in a state of collapse. . . gloriously readable. . . One of the nonfiction titles of the year, it is destined for literary accolades and popular success -- Luke Harding * Observer *
An astonishing and deeply resonant memoir about growing up in the last days of the last Stalinist outpost of the 20th century. . . What makes it so unforgettable is that we see this world, one about which we know so little, through the eyes of a child.. . It is more fundamentally about humanity, and about the confusions and wonders of childhood. Ypi weaves magic in this book: I was entranced from beginning to end -- Laura Hackett * Sunday Times *
Utterly engrossing . . . Ypi's memoir is brilliantly observed, politically nuanced and - best of all - funny. An essential book, just as much for Britons as Albanians -- Stuart Jeffries * Guardian *
Fantastically engaging. . . A breakout book. . . Such an engrossing story that it is (almost) unsurprising that it is already being translated into eleven languages. If a film follows, don't be surprised -- Tim Judah * Financial Times *
Five stars. . . deserves to be added to the history curriculum * Daily Telegraph *
This vivid rendering of life amid cultural collapse is nothing short of a masterpiece * Publishers Weekly *
Remarkable and highly original . . . Both an affecting coming-of-age story and a first-hand meditation on the politics of freedom -- Caroline Sanderson * Editor's Choice, Bookseller *
A probing personal history, poignant and moving. A young life unfolding amidst great historical change - ideology, war, loss, uncertainty. This is history brought memorably and powerfully to life -- Tara Westover, author of Educated
A lyrical memoir, of deep and affecting power, of the sweet smell of humanity mingled with flesh, blood and hope -- Philippe Sands, author of East West Street
Free is astonishing. Lea Ypi has a natural gift for storytelling. It brims with life, warmth, and texture, as well as her keen intelligence. A gripping, often hilarious, poignant, psychologically acute masterpiece and the best book I've read so far this year -- Olivia Sudjic, author of Asylum Road
Lea Ypi's teenage journey through the endtimes of Albanian communism tells a universal story: ours is an age of collapsed illusions for many generations. Written by one of Europe's foremost left-wing thinkers, this is an unmissable book for anyone engaged in the politics of resistance -- Paul Mason, author of Postcapitalism
This extraordinary coming-of-age story is like an Albanian Educated but it is so much more than that. It beautifully brings together the personal and the political to create an unforgettable account of oppression, freedom and what it means to acquire knowledge about the world. Funny, moving but also deadly serious, this book will be read for years to come -- David Runciman, author of How Democracy Ends
A new classic that bursts out of the global silence of Albania to tell us human truths about the politics of the past hundred years. . . It unfolds with revelation after revelation - both familial and national - as if written by a master novelist. As if it were, say, a novella by Tolstoy. That this very serious book is so much fun to read is a compliment to its graceful, witty, honest writer. A literary triumph -- Amy Wilentz, author of Farewell, Fred Voodoo
Illuminating and subversive, Free asks us to consider what happens to our ideals when they come into contact with imperfect places and people and what can be salvaged from the wreckage of the past -- Azar Nafisi, author of Reading Lolita in Tehran
A young girl grows up in a repressive Communist state, where public certainties are happily accepted and private truths are hidden; as that world falls away, she has to make her own sense of life, based on conflicting advice, fragments of information and, above all, her own stubborn curiosity. Thought-provoking, deliciously funny, poignant, sharply observed and beautifully written, this is a childhood memoir like very few others -- a really marvellous book -- Noel Malcolm, author of Agents of Empire
Free is one of those very rare books that shows how history shapes people's lives and their politics. Lea Ypi is such a brilliant, powerful writer that her story becomes your story -- Ivan Krastev, author of The Light that Failed
Lea Ypi is a pathbreaking philosopher who is also becoming one of the most important public thinkers of our time. Here she draws on her unique historical experience to shed new light on the questions of freedom that matter to all of us. This extraordinary book is both personally moving and politically revolutionary. If we take its lessons to heart, it can help to set us free -- Martin Hagglund, author of This Life
I haven't in many years read a memoir from this part of the world as warmly inviting as this one. Written by an intellectual with story-telling gifts, Free makes life on the ground in Albania vivid and immediate -- Vivian Gornick, author of Unfinished Business

Lea Ypi has a wonderful gift for showing and not telling. In Free she demonstrates with humour, humanity and a sometimes painful honesty, how political communities without human rights will always end in cruelty. True freedom must be from both oppression and neglect

-- Shami Chakrabarti
Lea Ypi is a professor of Political Theory at the London School of Economics. Her first trade book, Free is being translated into twelve languages.
NGR9780241481851
9780241481851
0241481856
Free: Coming of Age at the End of History by Lea Ypi
Lea Ypi
New
Hardback
Penguin Books Ltd
2021-10-28
336
N/A
Book picture is for illustrative purposes only, actual binding, cover or edition may vary.
This is a new book - be the first to read this copy. With untouched pages and a perfect binding, your brand new copy is ready to be opened for the first time
Trustpilot