To Pixar and Beyond Lawrence Levy 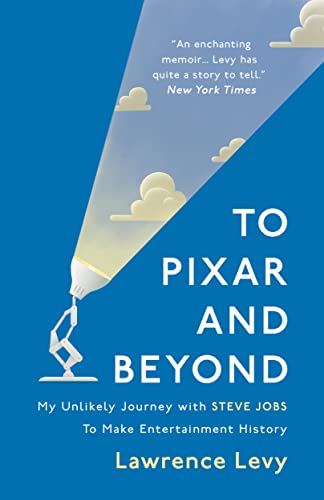 To Pixar and Beyond by Lawrence Levy

To Pixar and Beyond: My Unlikely Journey with Steve Jobs to Make Entertainment History by Lawrence Levy

A Sunday Times Best Book of the Year 2017

One day in November 1994, Lawrence Levy received a phone call out of the blue from Steve Jobs, whom he'd never met, offering him a job running Pixar, a little-known company that had already lost Jobs $50 million. With Pixar's prospects looking bleak, it was with some trepidation that Levy accepted the position. After a few weeks he discovered that the situation was even worse than he'd imagined.

Pixar's advertising division just about broke even, its graphics software had few customers, its short films didn't make any money and, on top of all that, Jobs was pushing to take the company public. Everything was riding on the studio's first feature film, codenamed Toy Story, and even then it would have to be one of the most successful animated features of all time...

Full of wisdom on bringing business and creativity together, and recounting the touching story of Levy's enduring friendship with Jobs, To Pixar and Beyond is a fascinating insider's account of one of Hollywood's greatest success stories.

`A fascinating tale of creative and business brilliance, and of a remarkable friendship.' * Sunday Times *
`A highly readable and gripping story.' * Mail on Sunday *
'A charming, upbeat tale...much like one of the studios own animated features.' * Financial Times *
'A magnifying glass held to the small print that is needed to make magic.' * The Sunday Times *
'Levy's memoir of his time heading the most dazzling entertainment studio of our times, has all the twists and turns of one of Pixar's own films.' -- Francine Stock * Prospect *
'This book, like Pixar's story, is truly remarkable.' * E&T Magazine *
`[An] enchanting memoir...Mr Levy has quite a story to tell.' * New York Times *
`Those interested in how start-ups work or how film studios make money will love the book.' * MoneyWeek *
`I love this book! I think it is brilliant. Of course I am biased, but even so, I think people will love this story - one they didn't even know existed. And Lawrence has told it beautifully.' -- Ed Catmull, co-founder and president of Pixar Animation, president of Disney Animation, bestselling author of Creativity Inc.
`A lovely and surprising discourse on topics business books rarely touch...eye-opening and inspiring... This delightful book is about finance, creative genius, workplace harmony, and luck... Life obviously is about more than business, but few books discuss both so well.' * Fortune *
`What a delightful book about the creation of Pixar from the inside. I learned more about Mr. Jobs, Pixar and business in Silicon Valley than I have in quite some time. And like a good Pixar film, it'll put a smile on your face.' * Andrew Ross Sorkin, New York Times *
`A finely sketched insider's account of the hard-fought success of a pathbreaking company. Lawrence Levy goes surprisingly and refreshingly deep on the business details behind Pixar's creative achievements. He also shows an intimate side of Steve Jobs that will delight the mercurial businessman's many admirers.' -- Adam Lashinsky, assistant managing editor of Fortune Magazine and author of Inside Apple
`To Pixar and Beyond is part business book and part thriller - a tale that's every bit as compelling as the ones Pixar tells in its blockbuster movies. It's also incredibly inspirational, a story about a team that took big risks and reaped the rewards. This is a must-read book for anyone who cares about corporate culture and wants to learn how to build a business, as well as everyone who loves Woody, Buzz, and all of the other beloved Pixar characters. I loved this book and could not put it down.' -- Dan Lyons, bestselling author of Disrupted
`The gripping story of how through hard work, vision, and a devotion to excellence, tiny Pixar transformed itself into a Hollywood powerhouse. But it also something more: a wonderful buddy story - between Levy and Steve Jobs - and how their friendship and partnership transformed them both.' -- William D. Cohan, bestselling author of House of Cards and Money and Power
Lawrence Levy was hired by Steve Jobs as chief financial officer and member of the Office of the President of Pixar Animation Studios in 1994. He guided Pixar's transformation from a money-losing graphics company into a multibillion-dollar entertainment studio. Originally from London, he now lives with his wife Hillary in Palo Alto, California.
GOR008361253
9781786070814
1786070812
To Pixar and Beyond: My Unlikely Journey with Steve Jobs to Make Entertainment History by Lawrence Levy
Lawrence Levy
Used - Like New
Hardback
Oneworld Publications
20170302
272
N/A
Book picture is for illustrative purposes only, actual binding, cover or edition may vary.
The book has been read, but looks new. The book cover has no visible wear, and the dust jacket is included if applicable. No missing or damaged pages, no tears, possible very minimal creasing, no underlining or highlighting of text, and no writing in the margins
Trustpilot