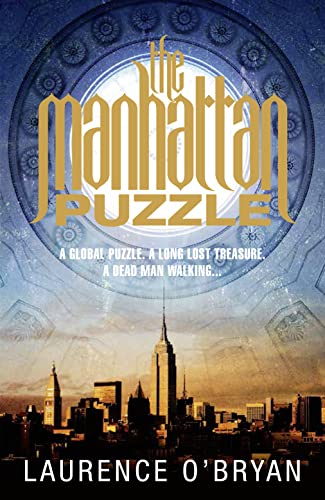 The Manhattan Puzzle by Laurence O'Bryan

A global puzzle. A secret symbol. A conspiracy that ends in death. Perfect for fans of Dan Brown's Inferno.

The Manhattan Puzzle by Laurence O'Bryan

A global puzzle. A secret symbol. A conspiracy that ends in death. Perfect for fans of Dan Brown's Inferno.

An international cover-up that could change the course of history...

Sean has been tracking a symbol from another age. It provides a clue to a barbaric conspiracy. A puzzle with an answer feared for millenia.

When Isabel wakes to find Sean hasn't come home she doesn't worry. At first. But when the police turn up on her doorstep wanting to interview him, she has to make a decision.

Does she keep faith in him or does she believe the evidence?
The symbol Sean and Isabel have been chasing will finally be revealed in Manhattan as one of the greatest banks in the world totters. Can Isobel uncover the truth before time runs out...or will she too be murdered?

A thrilling, high-octane race to save civilisation that will engross fans of Dan Brown, David Baldacci and James Patterson.

Laurence was born in Dublin. He studied business, then IT at Oxford University. After going to England he paid for his own courses and began rising at 4AM so he could study and work at the same time. One early job was as a kitchen porter near the Bank of England cleaning the plates of the well connected. He stayed in squats in London and struggled for years. Laurence was first published by a school newspaper when he was ten, for a short story about aliens getting lost. Thirty-five years later, he attended a authonomy workshop and not long after was offered a publishing contract for three books.The New York Puzzle is his third novel.

GOR011162700
9781847562906
1847562906
The Manhattan Puzzle by Laurence O'Bryan
Laurence O'Bryan
Used - Like New
Paperback
HarperCollins Publishers
2013-10-10
400
N/A
Book picture is for illustrative purposes only, actual binding, cover or edition may vary.
The book has been read, but looks new. The book cover has no visible wear, and the dust jacket is included if applicable. No missing or damaged pages, no tears, possible very minimal creasing, no underlining or highlighting of text, and no writing in the margins
Trustpilot