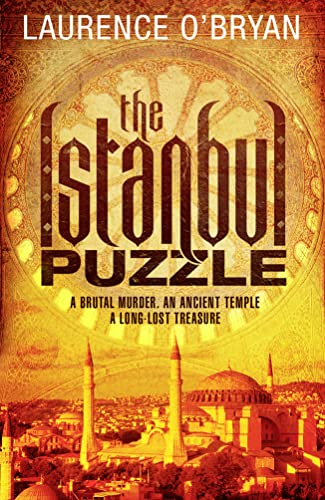 The Istanbul Puzzle by Laurence O'Bryan

Buried deep under Istanbul, a secret is about to resurface with explosive consequences...

The Istanbul Puzzle by Laurence O'Bryan

Buried deep under Istanbul, a secret is about to resurface with explosive consequences...

Alex Zegliwski has been savagely beheaded. His body is found hidden near the sacred archaeological site of Hagia Sophia in Istanbul.

When Sean arrives in the ancient city to identify his colleague's body, he is handed an envelope of photographs belonging to Alek and soon finds himself in grave danger. Someone wants him dead but why?

Aided by British diplomat Isabel Sharp, Sean begins to unravel the mystery of the mosaics in the photographs and inch closer to snaring Alek's assassin. Evil is at work and when a lethal virus is unleashed on the city, panic spreads fast. Time is running out for Sean and Isabel. They must catch the killer before it's too late.

An electrifying conspiracy thriller which will entice fans of Scott Mariani, Sam Bourne and Dan Brown.

Laurence was born in Dublin. He studied business, then IT at Oxford University. After going to England he paid for his own courses and began rising at 4AM so he could study and work at the same time. One early job was as a kitchen porter near the Bank of England cleaning the plates of the well connected. He stayed in squats in London and struggled for years. Laurence was first published by a school newspaper when he was ten, for a short story about aliens getting lost. Thirty-five years later, he attended a authonomy workshop and not long after was offered a publishing contract for three books. The first of which, The Istanbul Puzzle, won the Outstanding Novel award at the Southern California writer's conference in 2007.

GOR003496005
9781847562883
1847562884
The Istanbul Puzzle by Laurence O'Bryan
Laurence O'Bryan
Used - Very Good
Paperback
HarperCollins Publishers
2012-01-19
416
N/A
Book picture is for illustrative purposes only, actual binding, cover or edition may vary.
This is a used book - there is no escaping the fact it has been read by someone else and it will show signs of wear and previous use. Overall we expect it to be in very good condition, but if you are not entirely satisfied please get in touch with us
Trustpilot