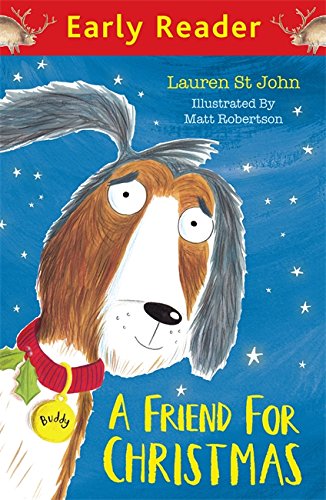 Early Reader: A Friend for Christmas by Lauren St John

Early Reader: A Friend for Christmas by Lauren St John

If Luka could have anything in the world for Christmas, it would be to see Buddy again, his red and grey mongrel with one floppy ear. But Buddy has been missing for months.

They're brilliant stories told by amazing authors and illustrators. Stuffed full of colour, not many words per page, they're perfect for children moving from picture books into reading chapter books. - Steve Cole, THE SUN
Lauren St John grew up surrounded by horses, cats, dogs, horses and a pet giraffe on a farm and game reserve in Zimbabwe, the inspiration for her bestselling White Giraffe and One Dollar Horse series. At 17, she spent a year in the UK working as a veterinary nurse before becoming a sports and music journalist. Dead Man's Cove, the first in her Laura Marlin Mystery series, won the Blue Peter Book of the Year Award. The Glory, her YA novel about a long-distance horse race across the American West, has been optioned for film. Her latest books are The Snow Angel, set in Kenya and Scotland, and Kat Wolfe Investigates, the first in a new mystery series about a pet-sitter who lives in idyllic Bluebell Bay on the Jurassic Coast. A passionate conservationist, Lauren is an Ambassador for the Born Free Foundation and the founder of Authors4Oceans. When not rescuing leopards and dolphins, she is a full-time valet to her rescued, and not in the least demanding, Bengal cat, Max. Matt Robertson grew up in Suffolk, and spent most of his childhood drawing and creating characters. He completed his MA in Children's Book Illustration at Cambridge School of Art in 2014, receiving a Distinction for his work. Matt is the winner of a Lara Jones Award and a Macmillan Children's Book Prize, and he was a finalist in the Waterstone's 'Picture This' competition. His first book, Super Stan, has been shortlisted for the Waterstones Picture Book Prize and is the winner of the 2017 Dundee Picture Book Award. Matt lives with his wife in Norwich.
GOR008471849
9781444008067
1444008064
Early Reader: A Friend for Christmas by Lauren St John
Lauren St John
Early Reader
Used - Very Good
Paperback
Hachette Children's Group
2016-11-03
64
N/A
Book picture is for illustrative purposes only, actual binding, cover or edition may vary.
This is a used book - there is no escaping the fact it has been read by someone else and it will show signs of wear and previous use. Overall we expect it to be in very good condition, but if you are not entirely satisfied please get in touch with us
Trustpilot