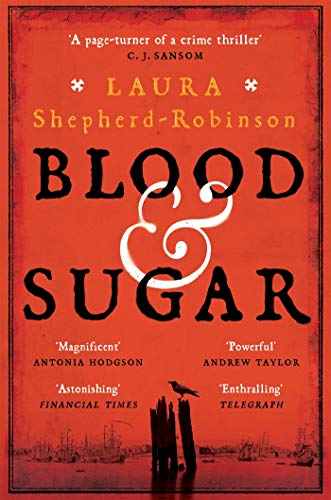 1781. An investigation into a gruesome murder on the Deptford Docks leads to a dark secret that could change the very core of British society . . .

'A page-turner of a crime thriller . . . This is a world conveyed with convincing, terrible clarity' - C. J. Sansom

June, 1781. An unidentified body hangs upon a hook at Deptford Dock - horribly tortured and branded with a slaver's mark.

Some days later, Captain Harry Corsham - a war hero embarking upon a promising parliamentary career - is visited by the sister of an old friend. Her brother, passionate abolitionist Tad Archer, had been about to expose a secret that he believed could cause irreparable damage to the British slaving industry. He'd said people were trying to kill him, and now he is missing . . .

To discover what happened to Tad, Harry is forced to pick up the threads of his friend's investigation, delving into the heart of the conspiracy Tad had unearthed. His investigation will threaten his political prospects, his family's happiness, and force a reckoning with his past, risking the revelation of secrets that have the power to destroy him.

And that is only if he can survive the mortal dangers awaiting him in Deptford . . .

Laura Shepherd-Robinson has written a story that is not only a page-turner of a thriller but, to an extent unusual in historical novels, where you feel you really are listening to a voice from the eighteenth century. This is a world conveyed with convincing, terrible clarity' -- C. J. Sansom
A novel of astonishing skill * Financial Times *
A tightly plotted crime story with vivid details of Georgian England * Sunday Times *
Stunning . . . Blood & Sugar is a harrowing and brutal epic [that] shocks and thrills in equal measure * Express *
A striking historical thriller . . . Few first novels are as accomplished as this -- Andrew Taylor, author of The Ashes of London
Epic, harrowing, thrilling, brutal, addictive. I read it flat out in one day -- C. J. Tudor, author of The Chalk Man
Enthralling * Daily Telegraph *
Magnificent . . . A tense and gripping historical thriller that shines an unwavering light on a dark period in British history. Unmissable. -- Antonia Hodgson, author of The Devil in the Marshalsea
Phenomenal . . . A shoo-in for one of the books of the year -- David Young, author of Stasi Child
A searing, ingeniously constructed story * The Times *
Extraordinary -- Caz Frear, author of Sweet Little Lies
Truly addictive -- Jenny Quintana, author of The Missing Girl
A passionate indictment of British involvement in the slave trade but it never neglects its duty to chill and thrill * Sunday Express *
With a hugely likeable hero at its heart, this rich and beautifully written debut marks out Laura Shepherd-Robinson as a major new talent -- Fiona Cummins, author of Rattle
The finest Georgian intrigue * The Times Crime Club *
A remarkably assured debut -- Elizabeth Fremantle, author of The Queen's Gambit
A page-turning dive into the torrid depths of London in the 1780s -- Mary Paulson-Ellis, author of The Other Mrs Walker
Gripping and original . . . I absolutely loved it -- Karen Hamilton, author of The Perfect Girlfriend
Immersive and exhilarating . . . I was completely swept away -- Holly Seddon, author of Love Will Tear Us Apart
Extraordinary, immersive, addictive and moving -- Olivia Kiernan, author of Too Close to Breath
I can't recommend it enough -- Jo Jakeman, author of Sticks and Stones
Utterly compelling . . . The next star of historical crime fiction has arrived -- R. N. Morris
The most absorbing, intelligent and breathtakingly atmospheric novel I've read in a long time -- Chris Whitaker
I haven't read such an accomplished historical novel since I was introduced to C.J. Sansom. -- Jo Spain
A gripping mystery . . . I loved it -- Laura Marshall, author of Friend Request
One of the best historical novels I've read in ages. -- Kaite Welsh, author of The Wages of Sin
Deptford, a gateway to and from Britain's expanding empire, is evoked in pungent detail. The British slave trade was an appalling episode in our history and the novel is unflinching in its refusal to sentimentalise motives or to row back on the savagery of the times. * Daily Mail *
Laura Shepherd-Robinson was born in Bristol in 1976. She has a BSc in Politics from the University of Bristol and an MSc in Political Theory from the London School of Economics. Laura worked in politics for nearly twenty years before re-entering normal life to complete an MA in Creative Writing at City University. She lives in London with her husband, Adrian. Blood & Sugar is her first novel.
GOR010269106
9781509880799
1509880798
Blood & Sugar by Laura Shepherd-Robinson
Laura Shepherd-Robinson
Used - Very Good
Paperback
Pan Macmillan
2020-01-09
464
N/A
Book picture is for illustrative purposes only, actual binding, cover or edition may vary.
This is a used book - there is no escaping the fact it has been read by someone else and it will show signs of wear and previous use. Overall we expect it to be in very good condition, but if you are not entirely satisfied please get in touch with us
Trustpilot