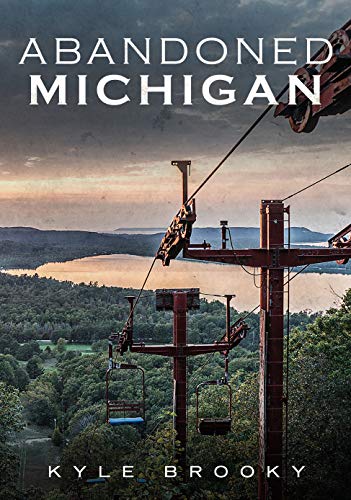 "In 2006, Michigan's unemployment rate was recorded as being the worst in the entire United States. People left. Businesses closed. Once swarming cities were full of boarded-up windows and locked doors. Some have since recovered and reopened, but many have not.

This is where Abandoned Michigan picks up the story. What became of these forgotten buildings? Have you ever wondered what lies within that old building as you drive past? Join us as we step foot inside these haunting and beautiful locations including: factories, ski resorts, mines, restaurants, hospitals, houses, and much, much more.

Featuring over 200 full-color photographs, you will witness the beauty that can be found in decay as we look at these buildings, many for the last time before they are lost forever to time or the wrecking ball. Abandoned Michigan not only takes you inside these lost places, but tells the history of them and how they came to be abandoned."

KYLE BROOKY has always been interested in the strange and offbeat. From a young age, he always wondered what lied within that "spooky old house" in the woods near his grandparents' cottage. In 2016, along with a partner, he formed Ruin Road, a video blog dedicated to exploring abandoned and forgotten buildings. Utilizing his media production degree, he has been dedicated to preserving these beautiful places through film and photographs to tell the history that is now forgotten by most. In his spare time, he enjoys writing screenplays and collecting movies.
GOR012408533
9781634991001
1634991001
Abandoned Michigan by Kyle Brooky
Kyle Brooky
Abandoned
Used - Very Good
Paperback
Fonthill Media LLc
2019-02-25
128
N/A
Book picture is for illustrative purposes only, actual binding, cover or edition may vary.
This is a used book - there is no escaping the fact it has been read by someone else and it will show signs of wear and previous use. Overall we expect it to be in very good condition, but if you are not entirely satisfied please get in touch with us
Trustpilot