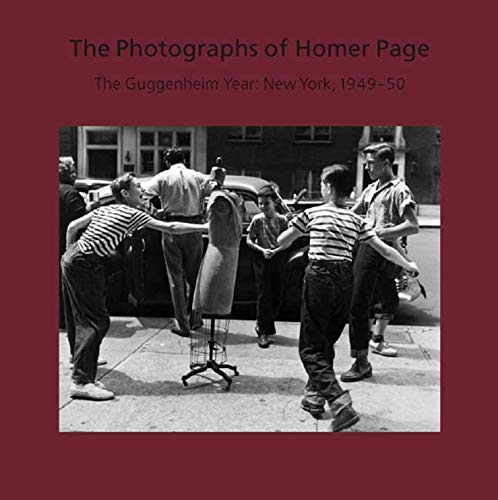 The Photographs of Homer Page by Keith F. Davis

Focuses on Homer Page's New York photographs taken while he was a Guggenheim Fellow during the late '40s.

This stunning volume represents a major photo-historical discovery: it is the first book on Homer Page (1918-1985), a brilliant but overlooked photographer active in the late 1940s and 50s. It focuses on his previously unpublished photographs of New York taken while a Guggenheim Fellow from 1949 to 1950. First recognized by Ansel Adams in 1944, California-born Page exhibited in a major show of young artists at the Museum of Modern Art, New York, in 1946. Four years later, he was invited to participate in MoMA's seminal photography symposium, alongside 10 other prominent photographers, including Walker Evans, Irving Penn, and Aaron Siskind.

In photographs that echo those of Walker Evans, Dorothea Lange, and Robert Frank, Page uniquely synthesized documentary and artistic concerns. His work as a Guggenheim Fellow--which depicts pedestrians in motion, friends and family members conversing, commuters, children playing, political rallies and protests, and isolated figures resting and watching--offers a fascinating look at New York during the late 1940s and represents the culmination of Page's most important work.

The Photographs of Homer Page features a plate section of these compelling and often poignant images together with texts by the artist, a bibliography, and an essay by noted scholar Keith F. Davis examining Page's life and career--

including his connections with Lange, Nancy and Beaumont Newhall, and Edouard Steichen.

Keith F. Davis is curator of photography at the Nelson-Atkins Museum of Art. He is the author of An American Century of Photography: From Dry-Plate to Digital, The Hallmark Photographic Collection (1999) along with The Art of Frederick Sommer: Photography, Drawing, Collage (2005) and The Origins of American Photography: From Daguerreotype to Dry-Plate, 1839-1885: The Hallmark Photographic Collection at The Nelson-Atkins Museum of Art (2007), both published by Yale.