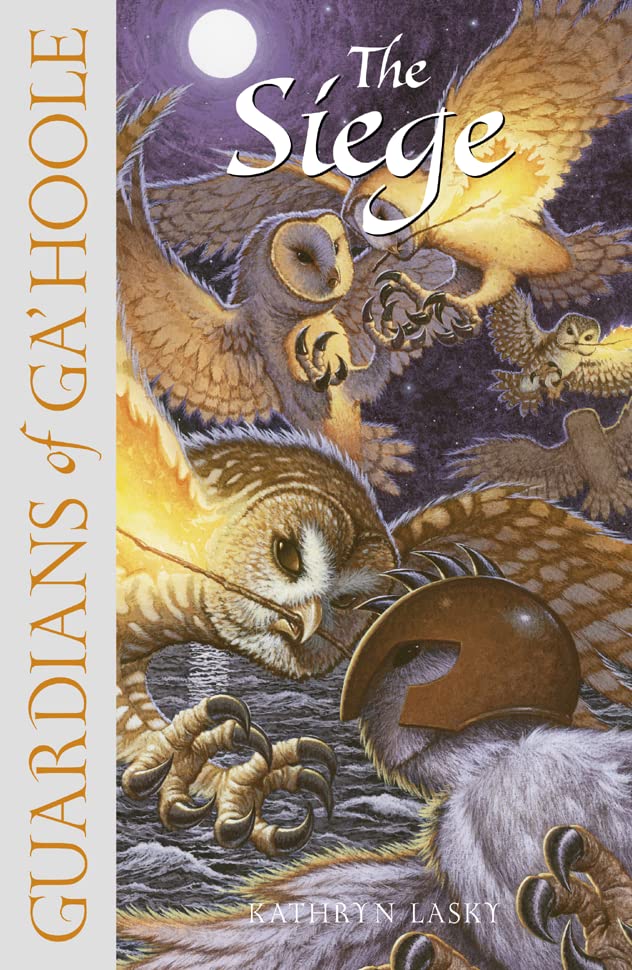 The Siege by Kathryn Lasky

Fourth title in a mythic adventure series in which the heroes are owls!

The Siege (Guardians of Ga'Hoole, Book 4) by Kathryn Lasky

Fourth title in a mythic adventure series in which the heroes are owls!

In the owl kingdom, a war between good and evil is raging. On one side, Soren and the noble owls of the Great Ga'hoole tree. On the other, Soren's fearsome brother Kludd, who wears a terrifying metal mask to cover his battle scars. Driven by an all-consuming lust for power, Kludd leads his forces in a brutal attack on the Great Ga'Hoole Tree.

Meanwhile, Soren is asked to lead a mission back to the one place he never wanted to see again - St Aegolius Academy for Orphaned Owls. He and his crew will have to enter St Aggie's as spies, then leave without being noticed...or caught.

Soren escaped the rocky confines of St Aggie's once. If the Ga'Hoole tree is to be saved he must do it again...

Kathryn Lasky has long had a fascination with owls. This led her to research their life and behaviour, thinking that she would write a non-fiction book about owls to be illustrated with her husband's photographs. She soon realised, though, that this would be rather difficult since owls are shy and nocturnal creatures - so she wrote a fantasy series about them instead.

GOR001457456
9780007215201
0007215207
The Siege (Guardians of Ga'Hoole, Book 4) by Kathryn Lasky
Kathryn Lasky
Guardians of Ga'Hoole
Used - Very Good
Paperback
HarperCollins Publishers
2007-01-03
240
N/A
Book picture is for illustrative purposes only, actual binding, cover or edition may vary.
This is a used book - there is no escaping the fact it has been read by someone else and it will show signs of wear and previous use. Overall we expect it to be in very good condition, but if you are not entirely satisfied please get in touch with us
Trustpilot