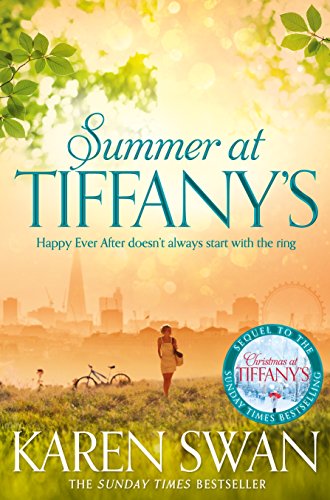 Summer at Tiffany's by Karen Swan

A stunning story of love, laughter and happily ever after, from the author of Christmas at Tiffany's and Christmas in the Snow.

Summer at Tiffany's by Karen Swan

Summer at Tiffany's by Karen Swan is the captivating and romantic sequel to Christmas at Tiffany's, perfect for fans of Santa Montefiore and Veronica Henry.

Cassie loves Henry. Henry loves Cassie. With a Tiffany ring on her finger, all that Cassie has left to do is plan the wedding. It should be so simple but when Henry pushes for a date, Cassie pulls back.

Henry's wild, young cousin, Gem, has no such hesitations and is racing to the aisle at a sprint, determined to marry in the Cornish church where her parents were wed. But the family is set against it, and Cassie resolves to stop the wedding from going ahead.

When Henry lands an expedition sailing the Pacific for the summer, Cassie decamps to Cornwall, hoping to find the peace of mind she needs to move forwards. But in the dunes and coves of the northern Cornish coast, she soon discovers the past isn't finished with her yet . . .

Karen Swan began her career in fashion journalism before giving it all up to raise her three children and to pursue her ambition of becoming a writer. Her titles include Christmas in the Snow, Christmas at Tiffany's and The Summer Without You. She lives in Sussex and writes her books from a treehouse overlooking the Downs.
GOR006735205
9781447280194
1447280199
Summer at Tiffany's by Karen Swan
Karen Swan
Used - Very Good
Paperback
Pan Macmillan
2015-07-02
480
N/A
Book picture is for illustrative purposes only, actual binding, cover or edition may vary.
This is a used book - there is no escaping the fact it has been read by someone else and it will show signs of wear and previous use. Overall we expect it to be in very good condition, but if you are not entirely satisfied please get in touch with us
Trustpilot