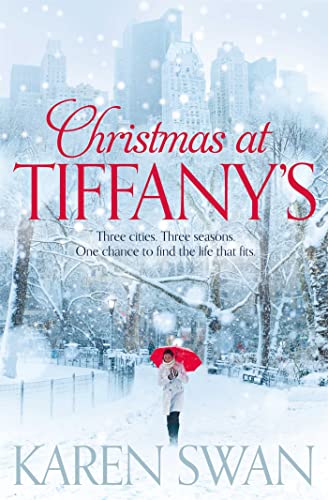 Christmas at Tiffany's by Karen Swan

Three cities, three seasons, one chance to find the life that fits.

Christmas at Tiffany's by Karen Swan

Christmas at Tiffany's is an exciting, globetrotting story of friendship and romance from Karen Swan.

Cassie settled down too young, marrying her first serious boyfriend. Now, ten years later, she is betrayed and broken. With her marriage in tatters and no career or home of her own, she needs to work out where she belongs in the world and who she really is.

So begins a year-long trial as Cassie leaves her sheltered life in rural Scotland to stay with each of her best friends in the most glamorous cities in the world: New York, Paris and London. Exchanging grouse moor and mousy hair for low-carb diets and high-end highlights, Cassie tries on each city for size as she attempts to track down the life she was supposed to have been leading, and with it, the man who was supposed to love her all along.

Karen Swan began her career in fashion journalism before giving it all up to raise her three children and to pursue her ambition of becoming a writer. She lives in the forest in Sussex, writing her books in a treehouse overlooking the Downs. Her debut novel Players, has since been followed by several further novels including Christmas in the Snow, The Perfecct Present, Christmas on Primrose Hill and the sequel to Christmas at Tiffany's - Summer at Tiffany's.
GOR010519823
9780330532723
0330532723
Christmas at Tiffany's by Karen Swan
Karen Swan
Used - Like New
Paperback
Pan Macmillan
2011-11-15
528
Short-listed for RoNa The Contemporary Romantic Novel of the Year Award 2012 (UK)
Book picture is for illustrative purposes only, actual binding, cover or edition may vary.
The book has been read, but looks new. The book cover has no visible wear, and the dust jacket is included if applicable. No missing or damaged pages, no tears, possible very minimal creasing, no underlining or highlighting of text, and no writing in the margins
Trustpilot