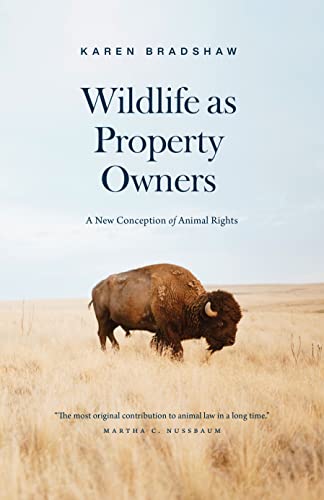 Wildlife as Property Owners: A New Conception of Animal Rights by Karen Bradshaw

Part I: A Foundational Understanding of Animal Property Law

1: The Nexus of Animal Rights and the Rights of Nature
2: Biodiversity Loss as a Property Law Problem

Part III: A Roadmap for Property Ownership to Benefit Biodiversity

9: Evaluating a Property-Based Approach to Biodiversity Preservation
10: The Implications of Interspecies Ownership on Property Theory

Conclusion: Are Animal Property Rights the Rights of Nature?
Acknowledgments
Notes
Index
GOR012423690
9780226571362
022657136X
Wildlife as Property Owners: A New Conception of Animal Rights by Karen Bradshaw
Karen Bradshaw
Used - Well Read
Paperback
The University of Chicago Press
2020-11-17
152
N/A
Book picture is for illustrative purposes only, actual binding, cover or edition may vary.
This is a used book. We do our best to provide good quality books for you to read, but there is no escaping the fact that it has been owned and read by someone else previously. Therefore it will show signs of wear and may be an ex library book
Trustpilot