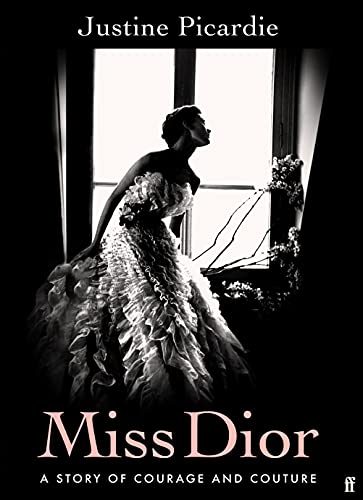 Miss Dior paints a portrait of the enigmatic woman behind the designer Christian Dior: his beloved younger sister, Catherine, who inspired his most famous perfume.

Miss Dior: A Story of Courage and Couture (from the acclaimed author of Coco Chanel) by Justine Picardie

'A gripping story in which Justine Picardie brilliantly contrasts the cruel Old World of wartime France with the hopeful New World epitomised by Christian Dior's New Look.' ANTONIA FRASER 'An incredible story of courage, endurance and passion.' MARIA GRAZIA CHIURI, Creative Director of Dior 'An extraordinary biography . . . in this book it is Catherine's story that shines - the quiet Dior who preferred flowers to fashion, the unsung heroine who survived the abuse of the Third Reich to help liberate France.' SUNDAY TIMES 'Exceptional . . . Picardie navigates with the intelligence and sympathy you would expect . . . Miss Dior is so much more than a biography. It's about how necessity can drive people to either terrible deeds or acts of great courage, and how beauty can grow from the worst kinds of horror.' DAILY TELEGRAPH Miss Dior is a story of freedom and fascism, beauty and betrayal, roses and repression, and how the polished surface of fashion conceals hidden depths. It paints a portrait of the enigmatic woman behind the designer Christian Dior: his beloved younger sister Catherine, who inspired his most famous perfume and shaped his vision of femininity. Justine Picardie's journey takes her to Occupied Paris, where Christian honed his couture skills while Catherine dedicated herself to the French Resistance, until she was captured by the Gestapo and deported to the German concentration camp of Ravensbruck. With unparalleled access to the Dior family homes and archives, Picardie's research into Catherine's courageous life shines a new light on Christian Dior's legendary work, and reveals how his enchanting 'New Look' emerged out of the shadows of his sister's suffering. Tracing the wartime paths of the Dior siblings leads Picardie deep into other hidden histories, and different forms of resistance and sisterhood. She explores what it means to believe in beauty and hope, despite our knowledge of darkness and despair, and discovers the timeless solace of the natural world in the aftermath of devastation and destruction. The result is an exquisite and unforgettably moving book. *A beautiful, full colour illustrated book featuring exclusive images from the Dior archives* 'Catherine's story is beautifully, hauntingly told in spare and elegant prose by Picardie . . . moving and evocative.' THE TIMES 'The juxtaposition of the terrible shadows and dazzling light is one of the great strengths of this book . . . A very personal, very passionate book.' ARTEMIS COOPER, TIMES LITERARY SUPPLEMENT 'Picardie writes: 'The vestiges of Catherine's presence remain as a powerful reminder of the importance of freedom, and why it is worth fighting for.' There are few truer words.' THE SPECTATOR 'Picardie's book is of the moment, celebrating an unsung hero at a time when female influences are earning new acclaim.' VOGUE 'Stunning.' RED 'Exquisite.' COUNTRY LIFE 'Not just beautifully written, this is a stunningly beautiful book.' NOON
'Every single person who has experienced the loss, yearning and honourable rage of bereavement will know that this is their book. There is nothing else like it.' - Nigella Lawson, on IF THE SPIRIT MOVES YOU

'Elegant . . . Coco has, in these pages, come out of hiding.' - Frances Wilson, Telegraph, on COCO CHANEL
Justine Picardie is the author of six books, including her critically acclaimed memoir, If the Spirit Moves You: Life and Love After Death, and the international bestseller, Coco Chanel: The Legend and the Life. She is a contributing editor to Harper's Bazaar, having previously been its editor-in-chief. She was formerly an investigative journalist for the Sunday Times, a columnist for the Telegraph, editor of the Observer Magazine and features director of Vogue.
NPB9780571356522
9780571356522
0571356524
Miss Dior: A Story of Courage and Couture (from the acclaimed author of Coco Chanel) by Justine Picardie
Justine Picardie
New
Hardback
Faber & Faber
20210909
448
N/A
Book picture is for illustrative purposes only, actual binding, cover or edition may vary.
This is a new book - be the first to read this copy. With untouched pages and a perfect binding, your brand new copy is ready to be opened for the first time
Trustpilot