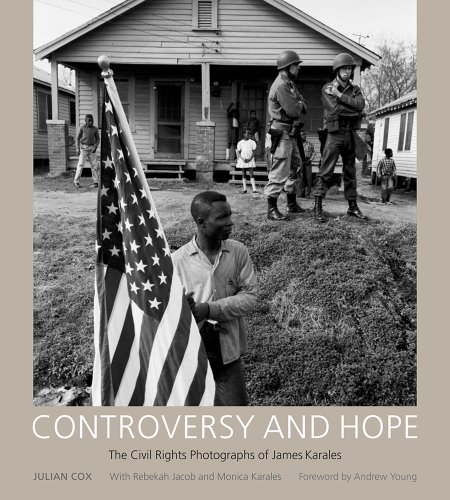 Controversy and Hope by Julian Cox

Commemorates the civil rights legacy of James Karales (1930-2002), a professional photojournalist who documented the 1965 Selma to Montgomery March for Voting Rights with a dedication and vision that led the New York Times to deem his work ""a pictorial anthem of the civil rights movement.

Controversy and Hope: The Civil Rights Photographs of James Karales by Julian Cox

Controversy and Hope commemorates the civil rights legacy of James Karales (1930-2002), a professional photojournalist who documented the 1965 Selma to Montgomery March for Voting Rights with a dedication and vision that led the New York Times to deem his work ""a pictorial anthem of the civil rights movement.""

Equipped with ambition and a B.F.A. in photography from Ohio University in 1955, Karales headed to New York and found work as a darkroom assistant to master photographer W. Eugene Smith. Karales's earliest photo-essays had already come to the attention of Edward Steichen, curator of photography at the Museum of Modern Art in New York, which acquired two of Karales's photographs from his series on the Greek American community of Canton, Ohio. Another early photo-essay, on the integrated mining community of Rendville, Ohio, was featured in Karales's first solo exhibition, held in 1958 at Helen Gee's Limelight Gallery in Greenwich Village. From 1960 to 1971, Karales worked as a staff photographer for Look magazine, traveling the world during a time of dynamic social change and recording the harsh realities he witnessed at home and abroad.

By the time Karales documented the fifty-four-mile voting-rights march from Selma to Montgomery, Alabama, in 1965, he had already developed a strong relationship with its most prominent leader, Dr. Martin Luther King Jr., and had been granted unprecedented access to the King family. That connection translated into a powerful empathy in the photographs that still resonates for viewers today.

The Village Voice described Karales's civil rights work as bearing ""the weight of history and the grace of art."" Controversy and Hope presents many of Karales's images from the era, including some photographs published here for the first time. Julian Cox, with the assistance of Rebekah Jacob and Monica Karales, has selected a bold representation of Karales's photographs, augmenting his visual legacy with biographical information and personal recollections. Civil rights leader Andrew Young, who appears in some of Karales's photographs, has provided a foreword to the volume.
Julian Cox is the founding curator of photography and chief curator for the Fine Arts Museums of San Francisco, USA.

Monica Karales is the widow of James Karales. She was born in Switzerland and raised in Lenzerheide-Valbella, in a picturesque valley in the Swiss Alps. Trained in the visual arts, she met and married James Karales in 1973 and was his constant companion until she was widowed in 2002. Karales has since dedicated herself to preserving her late husband's archive and ensuring that his legacy survives in the form of exhibitions and scholarly publications.
NPB9781611171587
9781611171587
161117158X
Controversy and Hope: The Civil Rights Photographs of James Karales by Julian Cox
Julian Cox
New
Paperback
University of South Carolina Press
2013-08-30
176
N/A
Book picture is for illustrative purposes only, actual binding, cover or edition may vary.
This is a new book - be the first to read this copy. With untouched pages and a perfect binding, your brand new copy is ready to be opened for the first time
Trustpilot